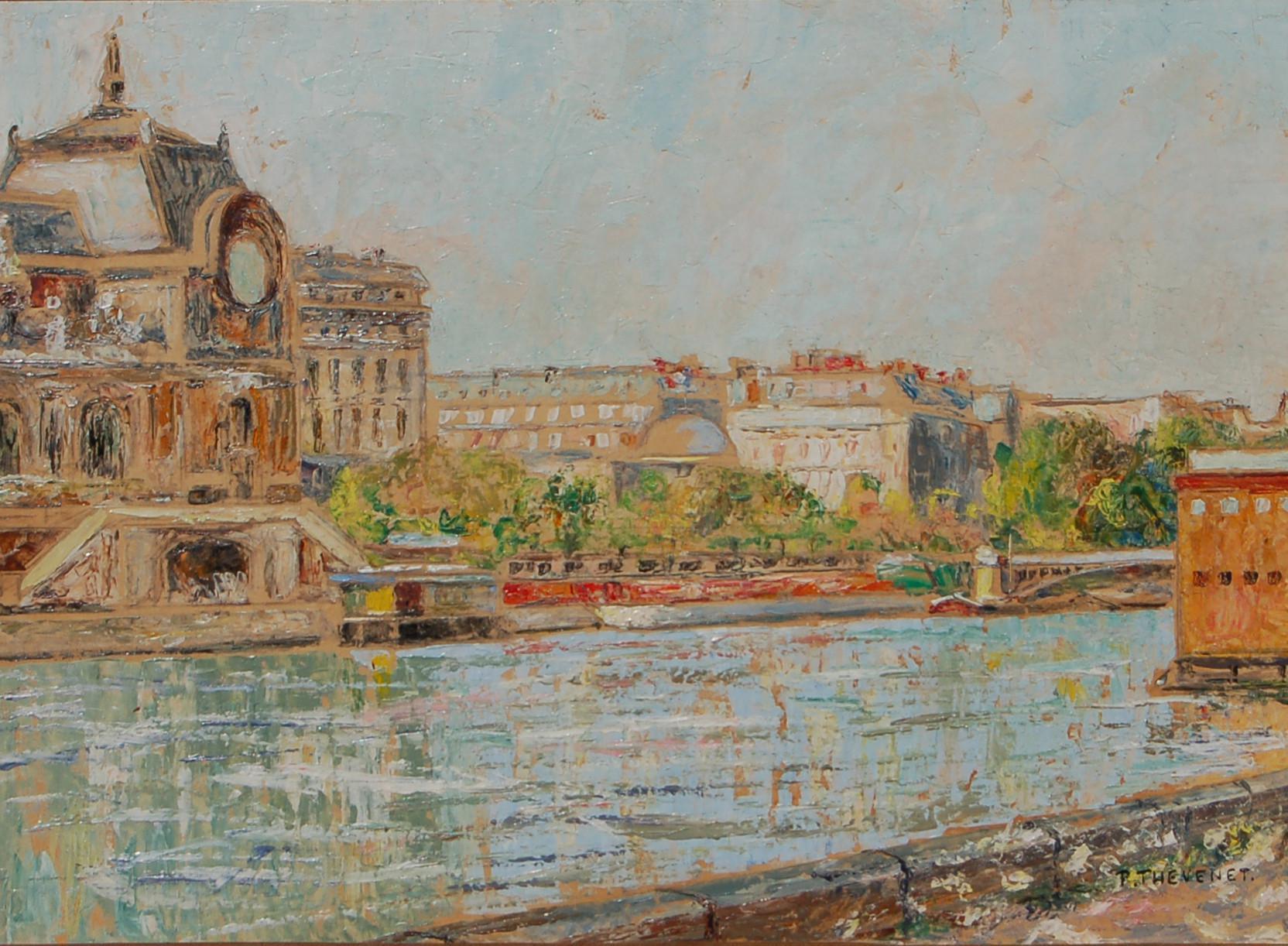 Born in Bruges on 1st March 1870, Pierre Thévenet was the older of the two painter brothers. Pierre worked in oils and watercolours depicting architectural scenes, landscapes and still-lifes in a neo-Impressionist style, whereas his brother Louis, born in 1874, concentrated mainly on still-lifes and interiors.

Pierre was a predominantly self-taught painter coming from a musical family. His father was a professional baritone, his mother a pianist and his younger sister Cecile later became an opera singer based in Paris. During his youth, Pierre played flute well enough to perform at the Opera House in Brussels and during that period he worked for the editor of the music journal "Beethoven".

He came in to contact with other artistic disciplines and a firm interest in painting ensued, enough for him to undertake instruction at L'Académie Libre La Patte de Dindon in Brussels. By the first decade of the 20th century, he was working as a painter, often in conjunction with other artists such as Frans Van Montfort and Marcel Jefferys and he was also teaching art a bit, even to his younger brother Louis. At this time he was painting Brabantine landscapes in a Luminist style and he was being increasingly drawn towards Fauvism.

He moved to Paris following the cessation of the First World War where he honed his technique, becoming a far more adept and accomplished painter and coming into contact

with artists such as Henri Matisse, Albert Marquet and Otton Friesz. He painted extensively in the Montmartre district and along the banks of the Seine and some of these, particularly in later years, show that he had become somewhat influenced by Utrillo. He particularly favoured quick, vibrant brushstrokes interspersed with a plain surface or white so that the coloured paint sections seem almost independent of each other which makes the observer fix their eyes more closely.

Some of his fellow artistic friends from Belgium, including Jefferys and van Montfort, came to visit him and these visits became reflected in their work also. Thévenet did not only work in Paris during his period of residing there though, making occasional forays to the Meuse Valley and Anseremme to paint and he also spent a few weeks in Venice and the south of France in 1922 and 1923 respectively.

He and his companion Madeleine returned briefly to Belgium in 1924 to secure a house in a village of Genval not far from Brussels but they were soon back in Paris and the pattern of their lives became wintering in Belgium and the summer in France. This dual residency was also reflected in his exhibition venues for he showed at Le Salon des Beaux Arts and Le Salon des Indépendants as well as other galleries in Paris. In Belgium, his work was represented in the Salons of Brussels, Ghent, Liège and Antwerp and also in galleries in Brussels

It was written of him in the press at the time that, "The majority of the paintings by Paul Thévenet are remarkable for their luminous angle, warm and charming. The works are full of cordiality, exhaling a soft peace and composing a poem which is serene and visual. He drinks from the fountain of Impressionism but still enjoys now and then the power of Fauvism."

He died in Brussels on 27th March 1937 and retrospective exhibitions of his career were held in Anseremme in 1937, in Antwerp in 1938, Le Palais des Beaux-Arts in1942 and Brussels in 1987. His work can be seen in Museums of Antwerp, Ixelles, Brussels, Dinant, Paris and Riga.