A Peacock, a Gamecock, three Tufted Hens and other Birds in a Landscape 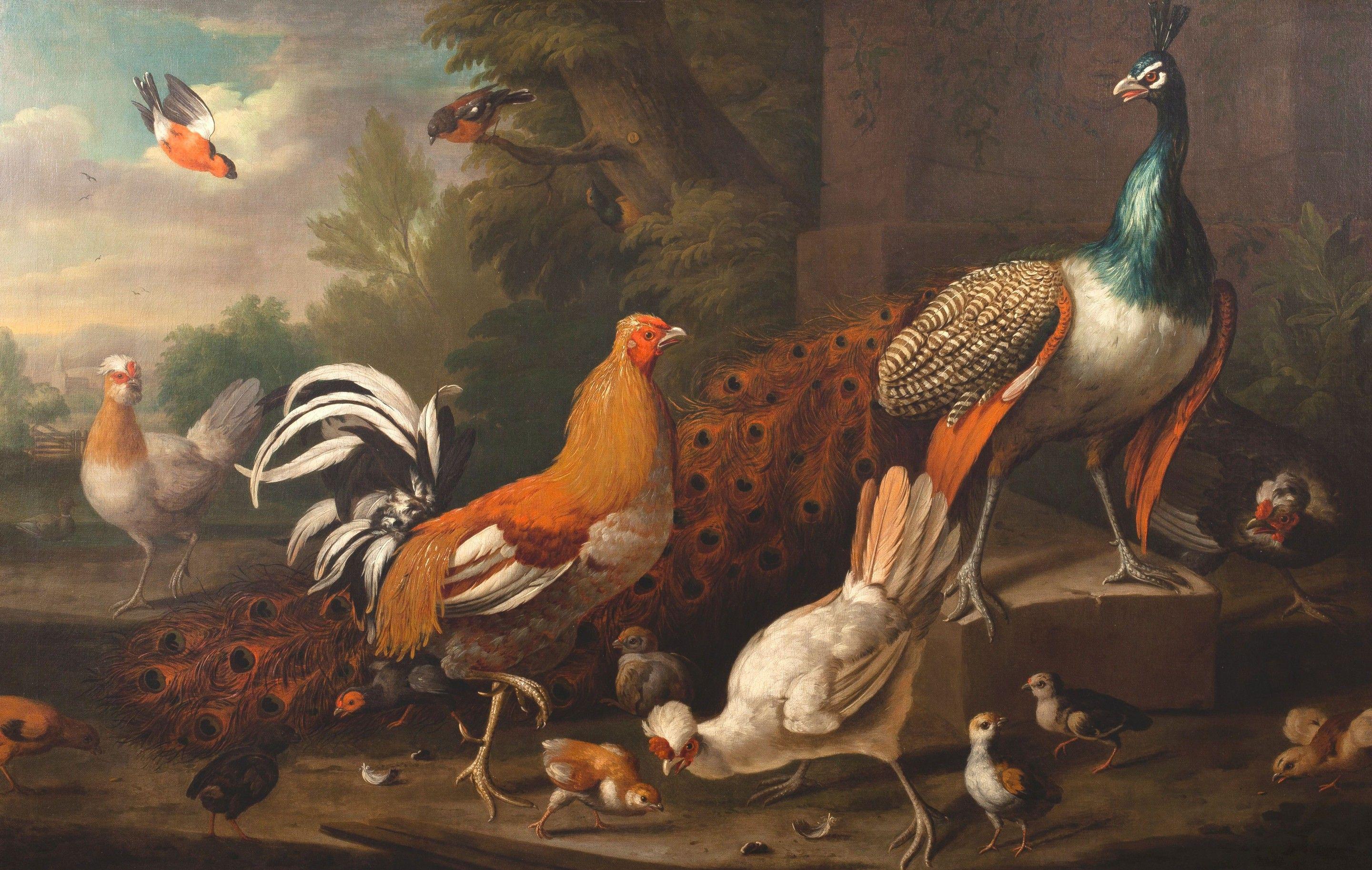 A Peacock, a Gamecock, three Tufted Hens and other Birds in a Landscape

J. C. Wood, in his Dictionary of British Animal Painters, writes of Charles Collins that he was: "An important early painter of birds and animals….his style had the precision of a miniaturist and he was adept at catching the characteristic pose of a bird." And Ellis Waterhouse writes that he was a "…painter of considerable competence".

Little is known of his life as there are few references to him in contemporary writing and his paintings are scarce. George Vertue mentions him in his notes which Horace Walpole published in five volumes as "Anecdotes of Painting in England" (1762-1771). The former writes that he "…painted all sorts of fowl and game. He drew a piece of a hare and birds and his own portrait in a hat".

Collins painted exotic birds, game, dogs and dead game still-lifes, sometimes in landscape settings and, as mentioned above, in one example he incorporated his own self-portrait into the work. Some of his dead game still lifes with a hare and game birds, clearly show the influence of the Dutch 17th century master Jan Baptist Weenix and his bird paintings have derived some inspiration from Melchior de Hondecoeter, and his followers. Collins had his own style though and they are clearly English pictures with the concomitant sensibility. He paid particular attention to the feathers, translating their softness onto the canvas and his colouration, particularly the reds, is vibrant. The composition of the placing of the birds is highly skilled, even in paintings densely packed with birds such as the set of nine formerly in the collection of Rogers Broughton, 1st Lord Fairhaven but now under the control of the National Trust at Anglesey Abbey.

This set, which originally comprised twelve paintings and done in 1736, have a multitude of English small birds, indeed there are 115 birds from fifty-eight species portrayed and they include buntings, meadow pipits, wrens, stonechats, larks, suchas, kingfishers, goldcrests, finches, tree creepers, wagtails etc. The landscapes have soft English green tones, far removed from Hondecoeter and his circle's more brown appearance. The entire set was engraved by Fletcher and Monde so that they could also be sold a set of prints. Collins was not the first to do this as Francis Barlow had produced a set of prints which had proved popular and Pieter Casteels had also produced set of prints of a set of twelve complex bird paintings. Collins's set was oblong folio size and were titled "Icones Avium" and sold well enough to require the plates to be re-etched by Henry Fletcher and James Mynde and reprinted in a smaller size.

There was a healthy demand for decorative paintings at this time, for with the growth of the British Empire, wealth was being distributed to a new class of society in addition to the gentry. Houses were getting bigger and interiors more elaborate and with larger windows allowing more light, more colourful decoration was required. Coupled with this was an increased awareness of exotic birds and animals with examples being brought back to this country from afar and filling privately owned menageries. The owners would need them to be painted, as they did with their horses, and artists from the Netherlands like Pieter Casteels and Robert Griffier, from Transylvania - Tobias Stranover and Hungary - Jakob Bogdani came to England to augment the numbers of native-born artists such as Marmaduke Cradock and Francis Barlow.

Collins also painted in watercolours and his ability to portray the softness of the feathers and their rich colours amd subtle highlights, was well suited to this medium. A good example is the watercolour of the common buzzard from 1739 which is in the collection the Cecil Higgins Art Gallery in Bedford.. He often used gouache for the bird and clear watercolours for the spare foregrounds and backgrounds. Studies like this were done for a commission by the collector Taylor White in about 1736 until about 1743. Together with the bird illustrator Peter Paillou, Collins was engaged to represent as many species of British mammals and birds as possible and they worked from examples in White's own London menagerie as well as in other collections. There are 659 works in the White collection (now housed in the McGill University Library, Montreal) and Collins has signed about 200 of these and dated some others.

Examples of his work, although quite rare, can be seen in Tate Britain - Lobster on a Delft Dish (1738), Royal Collection, Hampton Court, Bedford Art Gallery and the National Gallery of Ireland. A signed and dated 1742 painting of Red Parakeets was exhibited at Spink's in November 1968.