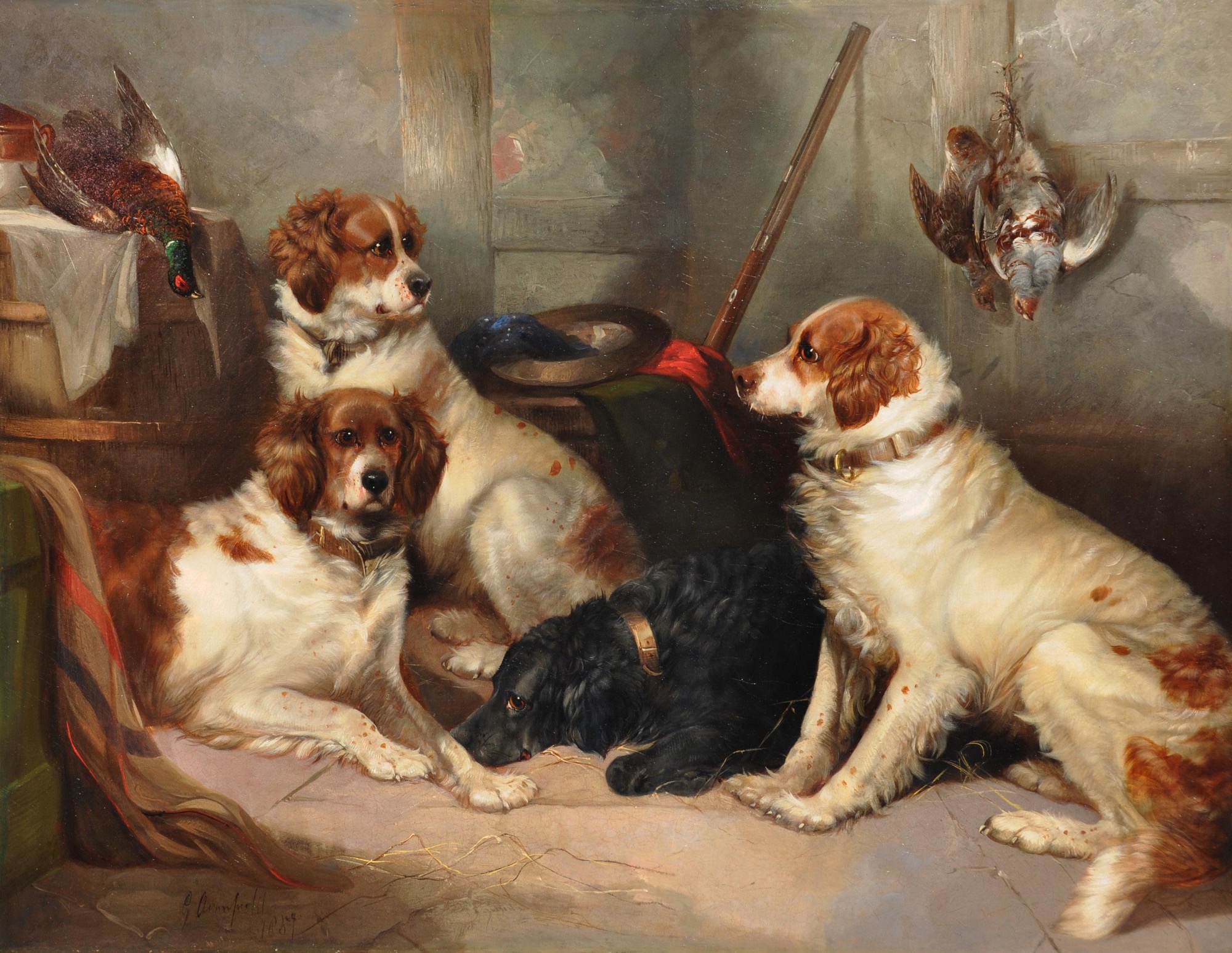 Possibly the painting exhibited at the Royal Academy in 1859 no. 655, “Interior; with Dogs”

George Armfield was probably the most prolific dog painter of the nineteenth century and one of the best known. He painted dogs almost exclusively and produced innumerable charming scenes of field sports with terriers surrounding rabbit holes, spaniels putting up mallard, ratting terriers, and groups of sporting dogs in interiors. Interior scenes included both barn and game rooms as well as more domesticated and luxurious settings where a small beribboned spaniel curled up on top of a large barrel is often featured. A few early subjects also include "The Dying Stag," "The Wolf and the Lamb" and several fox paintings with dead pheasants or badgers. As M H Grant writes of him "…this painter delighted Victorian collectors and sportsmen…"

George Armfield was born in Wales in the early years of the nineteenth century, although the precise date has not been established but during his working life was a London-based artist and lived in turn in Camberwell, Hampstead, Clapham, Wandsworth, Brixton, and Blackfriars. He was the son of an artist, and apparently had a brother, William, who also followed in their fathers footsteps, and was sent to Rome to pursue his art education.

Armfield was apprenticed to a fishing tackle maker, but left before the end of his apprenticeship to devote himself to art. He quickly became a successful painter, and from the age of 16 his works were much in demand. He kept a horse from this time, and married when he was 17 or 18. He had no children from this first marriage, but his second wife bore him a daughter, and when he married for the third time, a further twelve children were born.

Initially, George Armfield signed and exhibited his work as G A Smith, but changed this by omitting his proper surname and utilising his middle name in its stead when he exhibited the first of his paintings at the British Institution in 1839. For this inaugural showing of his work, Armfield entered two pictures entitled "Study of a Dogs Head" and "Terrier Chasing a Rabbit." The following year his work began to appear regularly in issues of Sporting Magazine. In 1840 Armfield began to exhibit at the Royal Academy and his work was also shown at the Royal Society of British Artists in Suffolk Street. He continued to exhibit regularly over the next twenty years and some other titles include: "The Game Keepers", "The Warrener", "The Pet Puppy", "Reynard disturbed", "The Larder invaded", "Don, a celebrated Dog of the Artist", "View near the Vale of Glamorgan" and "Terriers and Hedgehog". Throughout his life, he showed a total of 112 paintings under both names which included thirty-seven works at the Royal Academy, forty-three at the British Institution and forty-two at the RSBA.

Although the majority of his pictures were portraits of dogs, Armfield also painted horses, foxes, otters, deer and rabbits. He was renowned for his love of animals and kept a small menagerie at his house, and was said to paint his subjects from life, thus accounting for the accuracy and special charm of his subjects. His bull terrier Billy was a celebrated companion to the painter but he had a great love of all animals and the natural world and his empathy enabled him to have a remarkable influence over them. He was a keen sportsman and regularly went shooting, racing and hunting and had a reputation as a fine horseman to accompany his passion for fox hunting. In addition, Armfield was known to patronise the less reputable dens of dogfights and cockfights. It is recorded that he once spent three months at the Earl of Fitzwilliam's stables painting the horses and hounds in the kennels.

Armfield earned substantial amounts of money for his painting, but spent it easily, gambling and giving it away to those in need. He was a hard worker, and produced a large number of canvases; J C Wood says of him in his Dictionary of Animal Painters that "…it is safe to say that no painter will exceed the number of his pictures of terriers ratting". Sadly, he began to go blind later in life and was unsuccessfully operated on for this ailment. Acutely depressed by his loss of sight, Armfield attempted suicide. When he recovered, he continued to paint, often aided by a powerful eyeglass, working up close on small canvases but the quality of his work from this time was diminished and his best and most sought after work precedes the end of the 1860s. In late life, he was reduced to such poverty that the Royal Academy awarded him a pension of £20 per annum but he died in 1893 before drawing the first installment.


We are grateful to Mrs. Rosalie Nicol, the artists great granddaughter, for providing much of the above information.