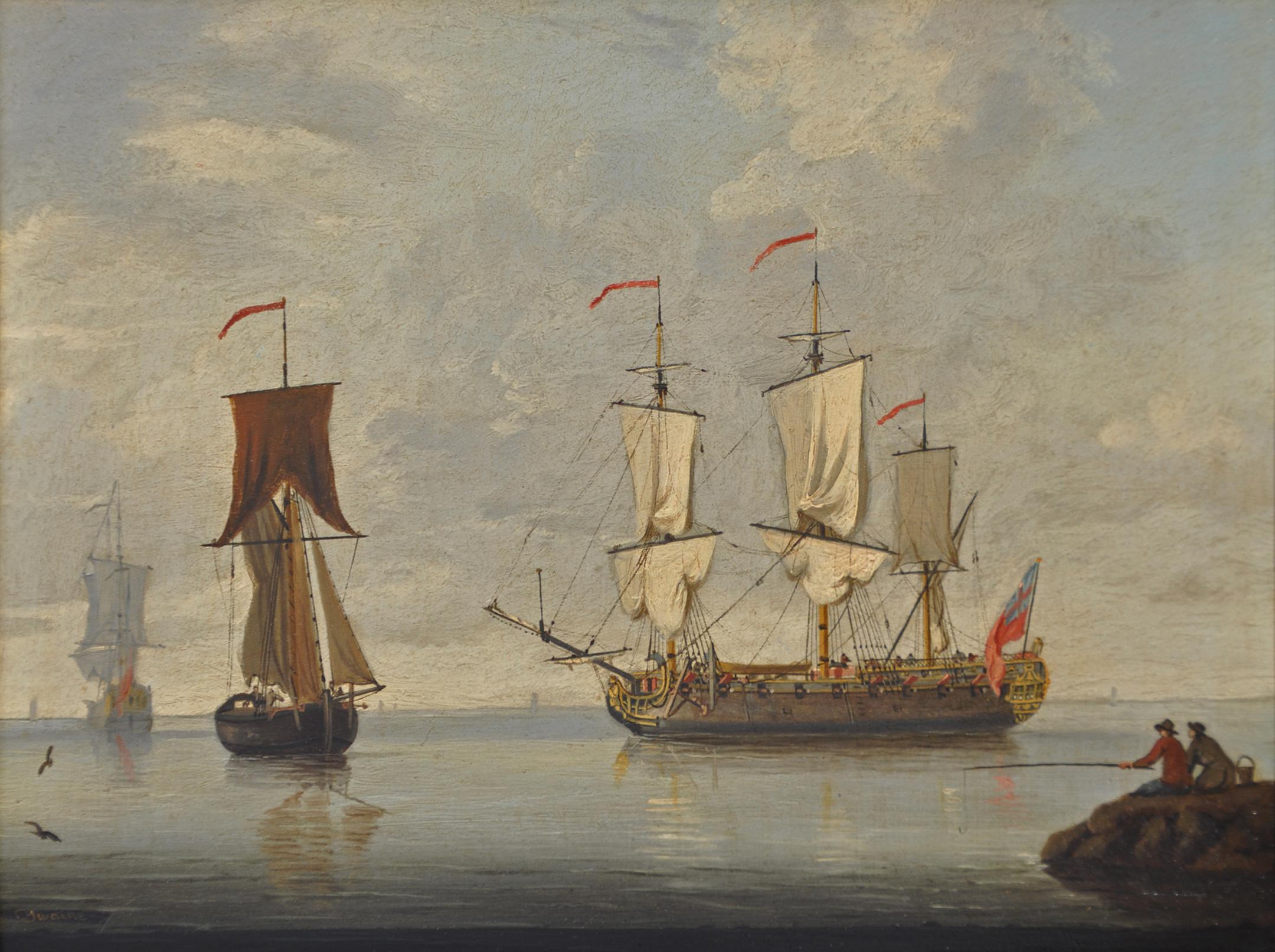 Francis Swaine was a painter of marines, sea fights and landscapes. He was christened at St Dunstan's in Stepney, London on 7th October 1725 and his parents were Francis Swaine and Ann Joel.

In the lists of officers and clerks in the employment of the Treasurer and Commissioners of His Majesty's Navy, Francis senior is recorded as applying to become a messenger in 1735. He cited as his suitability for the position his experience of over twenty-eight years serving in the Navy and that his father had been purser on board the Royal Katherine. Furthermore, he stated that he had five young children and that he had been engaged in "…little labours in drawing". Francis Swaine Snr was given the position of Navy Messenger and served until his death on 10th October 1755.

Francis Swaine the artist known today may have had some basic instruction in drawing from his father but the most likely artist who employed him as a pupil was the renowned marine painter Peter Monamy (1681-1749). There is strong evidence to support this as Admiral Sir George Young's son, Sir Samuel Young (1766-1826), refers to Swaine in his will as: "Old Swaine, pupil of Monami" (sic). There is another reference to their artistic relationship in the Biographical History of England by Mark Noble published in 1806 and under Monamy's entry appears: "Swaine, of Stretton Ground, Westminster, his disciple, and bred under him, was an excellent painter of moon-light pieces." Swaine's renowned painting of the Capture of the Foudrayant, a French naval vessel which was later incorporated into the English Navy, was taken in what became known as the "Moonlight Battle". Further proof of the influence that Monamy had on the aspirant painter and the close regard in which he was held can be evinced by Swaine's marriage on 29th June1749 at Allhallows, London Wall to Monamy's daughter Mary. The Swaines had two children: Anna Maria who was christened on 27th January 1751 and Monamy, named after his father's mentor, on 27th February 1753.

Francis Swaine was particularly adept at portraying fresh, breezy seascapes demonstrating a light touch and instinctive sense of what colours are most attractive. His pen and wash drawings can be particularly fine displaying a liveliness in the strokes which conjures up the sea's energy. His open seascapes are closer to Charles Brooking (1723-1759) in style whereas his calm, close to the shore paintings and estuary scenes clearly show the influence of Monamy.

He was also influenced by the Dutch masters and it is said that the art dealers of the day sold some of his paintings as "English van der Veldes." However, although little is known about whether he gained practical experience by going to sea, it is most apparent that his knowledge of ships was considerable and that his artistic skill in portraying sailing vessels and the sea is evident in his oeuvre.

Although best known as a painter of marine subjects, Swaine was also a capable and consistent portrayer of landscapes. These are rather in the style of the Smiths of Chichester having meadows and streams in the foreground with some cattle and rustic figures and a view to a distant church all combining to create most attractive pieces. As with some of his marines, he also admired the Dutch masters which were popular at the time with the public and he was happy to provide what these buyers required and would produce small pairs, often Morning and Evening, of inland waterways.

Swaine exhibited seventy-six paintings at the Free Society from 1761 (the date of the institution's inception) to 1783. This was a year after his death but the artist had earmarked seven paintings to be shown posthumously and he did the same thing with the Society of Artists where he exhibited forty-seven times from 1762 to1782 but with one painting, The destruction of the floating batteries before Gibraltar, exhibited in 1783. Some examples of these works include: A sea piece by moonlight; A view of the Thames about Chelsea Reach; A view of Purfleet with an East Indiaman lying in Long Reach, a calm; A view of Gravesend with the India Fleet; The great storm at Fort St David's in the East Indies in which several of His Majesty's ships, under the command of Admiral Boscawen, were lost; The action between the Monmouth and the Foudroyant, 1758; General Wolfe's headquarters in Gaspé Bay at the mouth of the St Lawrence before the assault on Quebec 1759.

He was awarded the Society of Arts' medal for sea pieces in 1764 and 1765. His son, Monamy, became an artist specialising in marines but also producing genre and still-life subjects which he showed at the Free Society between 1769 and 1774.