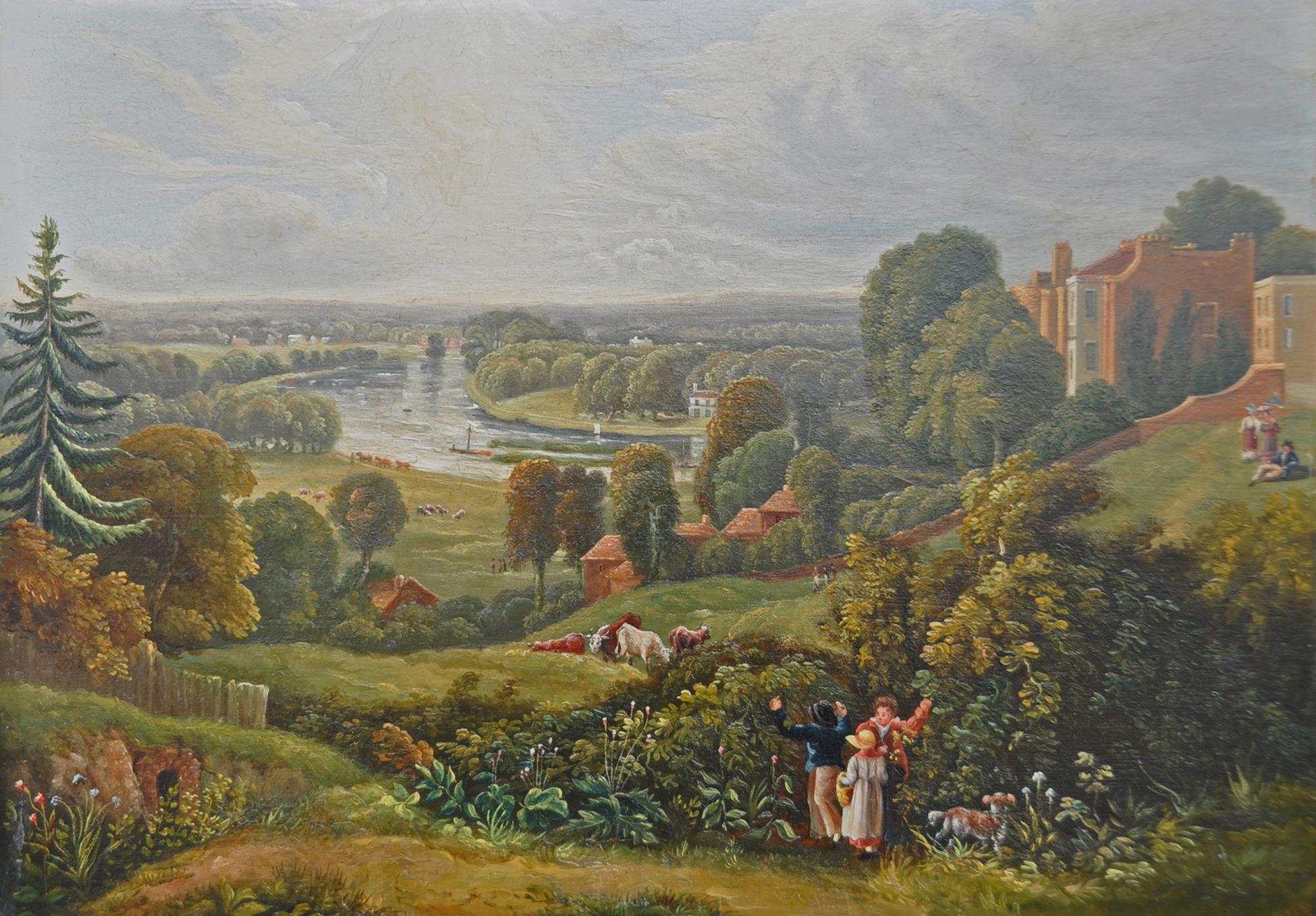 Thomas Christopher Hofland, was born at Worksop on Christmas Day, 1777, the son of a skilled and wealthy manufacturer of machinery used in cotton mills. His stay in the town of his birth was brief though for his father moved to London and was living in Lambeth in 1780 where his business from thence forward was unsuccessful, reducing the family to poverty.

Thomas Christopher was largely self-taught as a painter, although for a while he did receive instruction from the landscape painter John Rathbone, and he resolved to become a professional painter to help his family after the ruin of their business. He was primarily a landscape painter and he travelled all over England, Scotland, Wales and Ireland to find his subject-matter. In England, he favoured the Lake District, Yorkshire and Derbyshire as well as numerous views along the Thames, particularly Richmond, as he lived in Kew from 1799 to 1806 teaching art. He moved to Derby in 1806, remaining there until 1808 before returning to London.

He married the writer and poet Barbara Wreaks in 1810 who was known for her moral didactic children's stories and school text books and although Hofland was an established and exhibited painter, her income was always in excess if his. She was also a friend of John Soane and he asked her to write a description of his museum in Lincoln's Inn Fields. They lived initially in Newman St W1 but in 1816 moved to Twickenham but were back in Richmond by about 1839 having resided in several London addresses in between including Twickenham, Hammersmith, Kensington, Newman Street and Bedford Square.

Hofland found many patrons from some highly influential figures for his work, including George III, who commissioned him early in his career to produce a series of drawings of the plants and flowers which had recently come into the Royal Gardens. He also painted houses for their owners and there are frequent examples including Descriptive Account of the Mansions and Gardens of Whiteknights. White Knights, near Reading, was the seat of the Duke of Marlborough and this work was commissioned by the Duke to record the architectural features in the garden and landscape such as grottoes, seats, fountains and bridges. These were to be painted and drawn by Hofland as an illustrated account with some of the text supplied by Barbara Hofland in a book published in 1819 although the work on it was started in 1816. It seems that the Duke, who was notorious for not settling some of his bills, never paid the artist for his work, even though Hofland had funded the publishing of the volume. Barbara came across the Duke in 1827 and confronted him but later wrote that he was "…in excellent health and high spirits saying however not a word of paying my husband a shilling of all that he owes him and which is unquestionably gone for ever".

One of the founder members of the Royal Society of British Artists, he exhibited 118 works there with a further 72 at the Royal Academy and 141 at the British Institute. Examples of exhibited works include: "Landscape and figures - evening. 'The sun has lost his rage etc.'", "A view of Richmond Hill from Twickenham Ferry", "A view from Richmond Hill - evening. 'Heave'ns, what a goodly prospect spreads around etc'", "View of Edinburgh, taken near Cannon Mills", "Roach, dace and minnow", "Dead game", "A lime-kiln near Knaresborough" and "The Campagna of Rome with the Ruins of the Aqueduct".

He was a keen angler and it seems to be more than coincidence that many of the places that he painted happened to be noted for their fishing. So knowledgeable was he of his craft that the book which he wrote and illustrated: The British Angler's Manual; or, the art of angling in England, Scotland, Wales and Ireland: with some account of the principal rivers, lakes and trout streams in the United Kingdom, with instruction in fly-fishing, trolling, and angling at the bottom, and more particular for the trout. By T C Hofland, esq. Embellished with numerous engravings on steel and wood, from original pictiures and drawings by the author which was published in 1839, was renowned amongst aficionados of fly-fishing. This volume covered all aspects of angling but displayed a particular interest in trout fishing and was copiously illustrated throughout by Hofland with the engravings produced by W R Smith. The book covered several English counties but Derbyshire and Hampshire receive more attention. The rivers of the former are covered including the Erewash and the Dove, particularly around Dovedale where he spent several days both fishing and sketching, often in the company of the Yorkshire artist Ebenezer Rhodes. Grant says of him that he '…never failed to repair to the river bank wherever he found himself'. The painter and angler also developed his own fly which became known as the Hofland Fancy and in his manual he writes of it: "This fly, from its having been my great favourite for many years, has, by my friends, been named as above, and I am convinced of its excellence as a general fly. I am content to adopt it. Mr. Willingham, formerly of the Strand, sold great numbers of them under this name. I have had sport with it in most parts of England. I rarely use any other fly as a stretcher. I have killed trout with this fly at Farmingham when the May fly has been strong on the water, and the fish had refused any other I could offer. It may be used after sunset, in any part of the kingdom, and in any season." The recipe for it is given as having a brown tail, a dark claret floss body, a brown hackle and a wing that is bittern light or light turkey.

In 1840 he had commissions from the Earl of Egremont to make sketches in Italy and he spent nine months there before returning to England to work them up into paintings. He became ill though and travelled to Leamington to seek medical advice but died there on 3rd January 1843.

He had two sons, one of whom, Thomas Richard, became a painter and exhibited twice at the British Institute in 1844 and 1845 and both works were Italian views, one taken from a sketch by his father, suggesting that perhaps they visited that country together. The other, Frederic, became an Anglican priest who died in 1832.