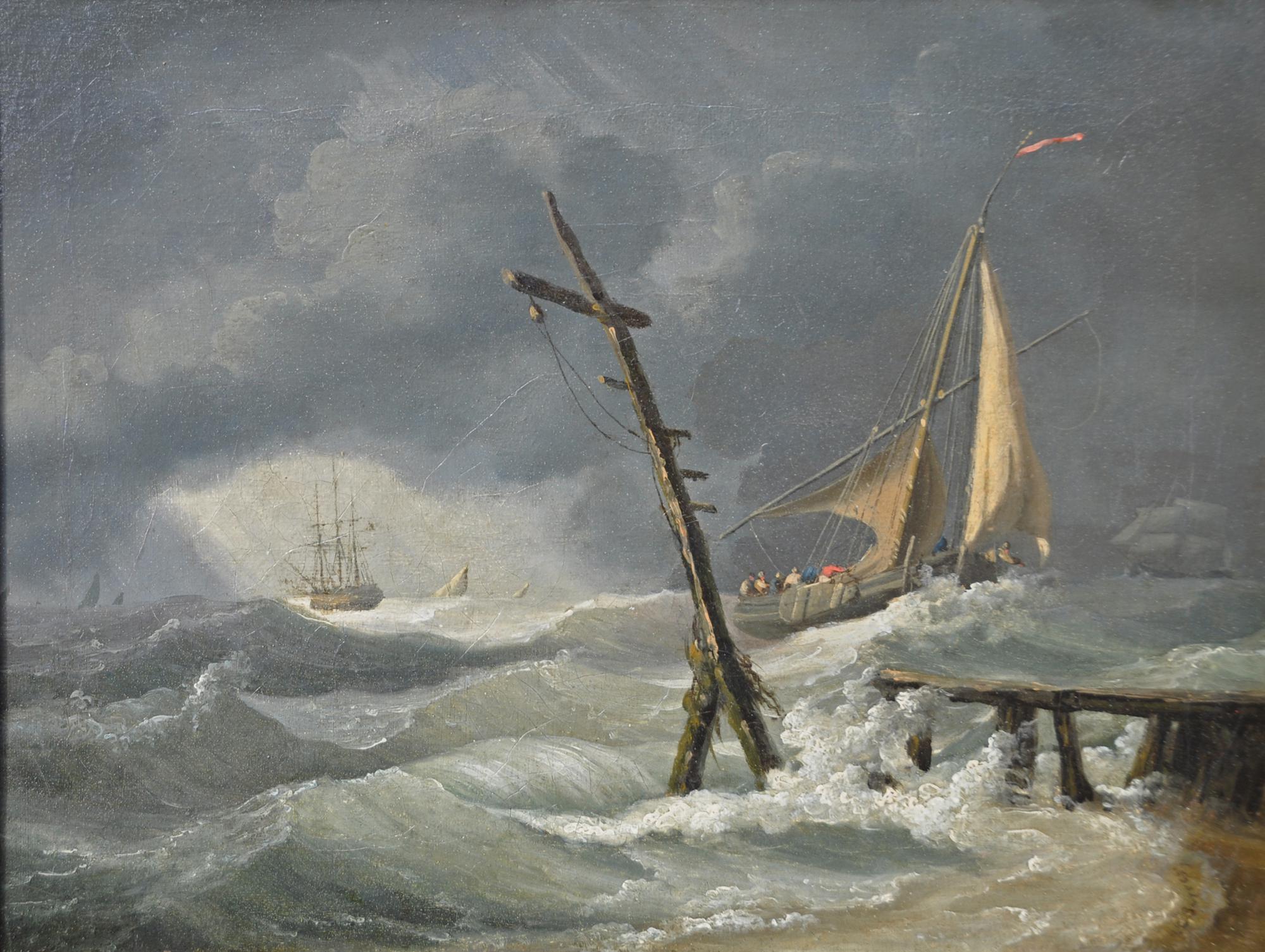 John Thomas Serres was a noted painter of sea and shipping, marine battles and landscapes who achieved considerable professional success in his lifetime.

He was born in London in December 1759 and was the elder son of the Marine Artist to George III, Dominic Serres. The latter had been born to a good family near Auch in Gascony and to escape his family's intentions of his joining the priesthood, had run away to sea. His ship had been captured by the English, possibly at the end of the War of Austrian Succession (1741-48). He spoke English well and quickly established himself as a marine painter, aided by his friendship with Charles Brooking. With his charming manner and marked artistic ability, he became a significant painter of marines and was a founder member of the Royal Academy in 1768.

The Seven Years War (1756-1763) aroused much interest in the English public with the ensuing demand for paintings which depicted current scenes and events and Serres Snr was ideally placed to satisfy this demand, not only through paintings but also by entering a joint venture with print makers. This artistic talent and business acumen he passed on to his sons John Thomas and Dominic the Younger and both were taught by him. However, apart from the three members of the Serres family mentioned so far, this remarkable family comprised ten painters in all and included, Miss A.E., Miss H and Miss Joanna among others.

When John Thomas reached the age of twenty, he joined the Maritime School based in Chelsea as Drawing Master. This new establishment was founded in 1777 by the international traveller and merchant Jonas Hanway who used his fortune to provide for charitable causes. The base was in Ormonde House, Paradise Row and had a fully-rigged vessel in the garden for eleven year old boys to gain expertise in rigging and masts to provide sufficient training for them to enter the navy as midshipmen. Drawing was seen as a required skill of all naval cadets at that time and Serres' annual salary of £50 was a substantial income and reflected the importance of the post. In addition, John Thomas was also giving private drawing lessons and building an influential network of contacts so, when he progressed to maritime painting, there was a ready source of commissions.

John Thomas was strongly influenced by the Romantic Movement and, most particularly by one of the principal painters of that style, Philippe de Loutherburg. Serres began his career as a landscape painter and in this discipline exceeded his father. He first exhibited at the Royal Academy aged only seventeen, showing "A View of the Queen's Palace", the artist being credited as Master Serres. He remained as an Honorary Exhibitor at the RA until 1779 and from 1780 onwards he was a professional painter.

In 1793, upon the death of his father, he succeeded him in being appointed Marine Painter to George III and the Duke of Clarence. The renowned artist Joseph Farington recorded in his diary on 16th November 1799 that: "J Serres to have the use of a parlour and a room on the 2nd floor in the house in which Turner lodges in Harley Street…Serres to use these rooms from 10 in the forenoon till 3 or 4 in afternoon". In 1800 he became Marine Draughtsman to the Admiralty. Serres' duties were to sail around the British coastline and those of France and Spain and into the Mediterranean in order to produce drawings in the form of elevations. This was a practice established by the Admiralty to record views to help in identifying landfalls and was a legacy of the 1739-44 round the world voyage of the 'Centurion' during which the first lieutenant Piercy Brett made drawings of the coastline which they passed and which were subsequently engraved. Some of the drawings which Serres made were published in 1801 in a book with the title "The Little Sea Torch".

1805 saw the publication of another book of his work and this volume, "Liber Nauticus" contained illustrated plates of both his father's and his own works depicting vessels and was intended to give guidance to students intent on becoming marine painters.

In his landscapes he "…improves on his senior's excellent but old-fashioned weighty manner by a lighter, but more artist-like handling approximating to that of William Marlow, with tints of tender green on grassy banks and a lucidity in cloud work which is admirable." (M.H. Grant). He always managed to include a lot of scenery into both his landscapes and marines and he was particularly adept at displaying the details of towns and cities in these landscape settings. Some examples of this early period in his career include: "View of the Water Engine at Pimlico", "Distant view of the City of Canterbury", "A Gentleman on Horseback", "Scene on the Canal at Hamburg" and "Belem Castle at the entrance to the River Tagus, Lisbon"

Serres travelled extensively to find subject matter for his paintings as well as to satisfy his intellectual curiosity but his tenure at the Chelsea Maritime School had prevented him from making trips until he was about thirty. He painted in Germany in 1787, Ireland in the same year and worked in the West Country in about 1790 but hankered after experiencing other countries over a more extended period. His problem was that he was not sufficiently wealthy to fund the trip on his own. Other artist's had employed the method of financing such a journey by accompanying a gentleman on the Grand Tour as a teacher and recorder, but this failed to materialise for Serres as he could not find a sponsor. The only way to raise some cash was through the sale of a large part of his collection of paintings which had probably been also built up by his father as well as by himself. 123 lots were sold on 22nd and 23rd April and included significant names such as Boucher, Kauffmann, Zuccaerelli, Cozens, Hackaert, Sandby as well as some of his own paintings and some by his brother and father.

In about 1790/1, he journeyed to France and Italy and exhibited paintings at the Royal Academy reflecting these travels with views of Provence, Genoa, Naples, Salerno, Leghorn, Rome and Florence. His first main stop was in Paris where apparently he helped to dismantle what little remained of the Bastille.

He also painted in Ireland and Scotland and, in 1820 he had a period in London producing a number of views of the city such as "St Paul's Cathedral from the Thames", "Westminster Abbey from Bishop's Walk, Lambeth - evening" and "A View taken from Chelsea looking across the Thames towards Battersea". In 1818, he had been one of the proprietors of the Royal Coburg Theatre (which later became the Old Vic) and was its "Director of the internal decorations…and also principal artist and Scene Painter…"

He met Olivia Wilmot when he was her drawing teacher and this developed into a relationship followed by marriage in 1791. She was a competent painter of romantic landscapes exhibiting at the RA from 1793-1808 and the BI 1806-11 and was appointed "Landscape Painter to the Prince of Wales" in 1806. She also wrote novels and produced vast quantities of rather bad poetry. This marriage though was the ruin of John Thomas, driving him to bankruptcy and a state of mind so broken that he attempted suicide in 1808 as a consequence of her extravagance, debauchery and persecution. She always maintained that she was the illegitimate daughter of Frederick, Duke of Cumberland, the youngest brother of George III, calling herself "Princess Olive of Cumberland" even though this claim was rejected twice through the courts.

Serres exhibited 67 works at the Royal Academy and ten at the British Institution. Until the appearance of this painting, only one of his paintings is known which is dated 1824 and that is a view of the Thames at Chelsea. However in 1825 he exhibited a significant number of works which gives rise to the speculation that several must have been unfinished in his studio prior to that year. Most notably were the depictions of the Battles of Trafalgar and the Nile which were for a competition sponsored by the British Institution with a prize of £200 for the winning entry of each subject. He entered this painting and "The Battle of the Nile. Representing the tremendous explosion of the French Commander-in-Chief's ship 'L'Orient' at 10 o'clock at night" and "The commencement of the Battle of the Nile" and all three were about the same size.

Serres had represented Trafalgar before, enthused by the English public's rejoicing at Nelson's victory and stole a march on all his competitors by being the first to complete renditions of the engagement. "Pandemonium of Boulogne", "The Commencement of the Action", "The Glorious Victory obtained by Admiral Lord Nelson" and "The Destruction of the Prizes in the Storm" were produced by him to mark the occasion. They were exhibited in Barker's Panorama in Leicester Square and the exhibition was advertised in the Times on 31st March 1806. Each painting was 6 by 12 feet and all were engraved by John Hall who turned them into coloured aquatints.

These works were the highlight of a flurry of production near the sad end to his life, precipitated by illness and he died in a debtors' prison in London 28th December 1825.