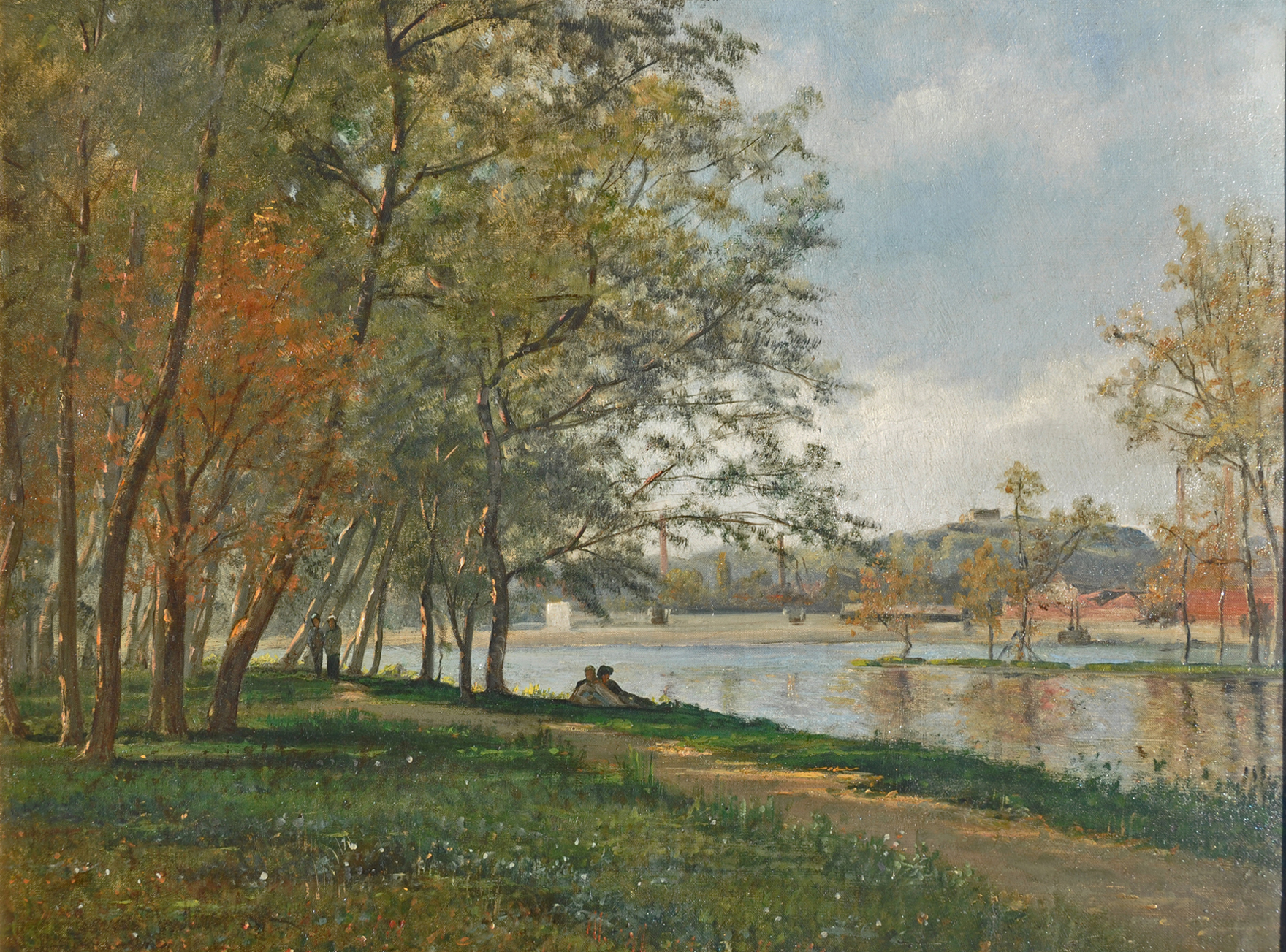 Oil on canvas, signed, inscribed on stretcher on reverse

A painter of rural landscapes, Emile Charles Lambinet is often included in the Barbizon school of artists even though he never depicted scenes in the eponymous town nor the environs of the Forest of Fontainebleau. His style of painting and the tones of the works however, are redolent of that school and appealed to the same collectors which is why he has become bracketed with that group.

He was born in Versailles on 13th January 1815 and having decided upon an artistic career, received instruction initially from Michel-Martin Drolling, Antoine-Felix Boisselier and Horace Vernet. He then studied under Jean Baptiste Camille Corot and Charles François Daubigny and it was these two masters who probably exerted the greatest influence on his technique and feel.

Lambinet portrayed subject matter all over France but also travelled to the Middle East and other parts of Europe including England and Switzerland. The depictions of slow moving rivers with subtle shades of green and dappled sunlight are particularly pleasing but he also showed what drove the rural economy with fishermen, farm workers making hay or ancient mills. He was particularly adept at painting animals and gained a reputation for this along with his landscape paintings.

James Augustus Suydam, 1819-1865, was an American architect, lawyer and artist who is considered one of the prime painters of the Luminist school of painters. He concentrated on landscape painting and was one of the most important members of the Hudson River School. Suydam became familiar with Lambinet’s work, started to collect his pictures and became influenced by the Frenchman’s portrayal of landscape. As a consequence, Lambinet’s paintings became popular in America.

The largest collection of Lambinet’s is held in his native Versailles which has a dedicated location, La Musée Lambinet, to display the paintings. Other museums which hold examples of his work include: Amiens; Avignon, Besancon; Brest; Cambrai; Dieppe; Glasgow; Montpellier; Moulins; Mulhouse; Sheffield; Strasbourg; Tours, the National Gallery of Ireland in Dublin and the Museum of Fine Arts Boston.

Île de la Jatte, (Island of the Bowl) situated in the department of Hauts de Seine and shared between the two communes of Levallois and Neuilly-sur-Seine, is an island in the Seine. It is only 7kms from Notre Dame as the crow flies and although it is close to two kilometres in length, at its widest, it is only two hundred metres. With about four thousand inhabitants, it is renowned in the world of Impressionism as the setting for George Seurat’s Un dimanche après-midi à l’Île de la Grande Jatte painted between 1884 and 1886.

The park on the island was created by the Duc d’Orleans who had purchased the area in 1818. Between 1850 and 1870, Napoleon III and Georges-Eugène Haussman made further alterations to the island and in the last quarter of the century it became popular as a subject for the artists of the Impressionist school who, besides Seuart, included van Gogh, Sisley, Angrand and Monet.