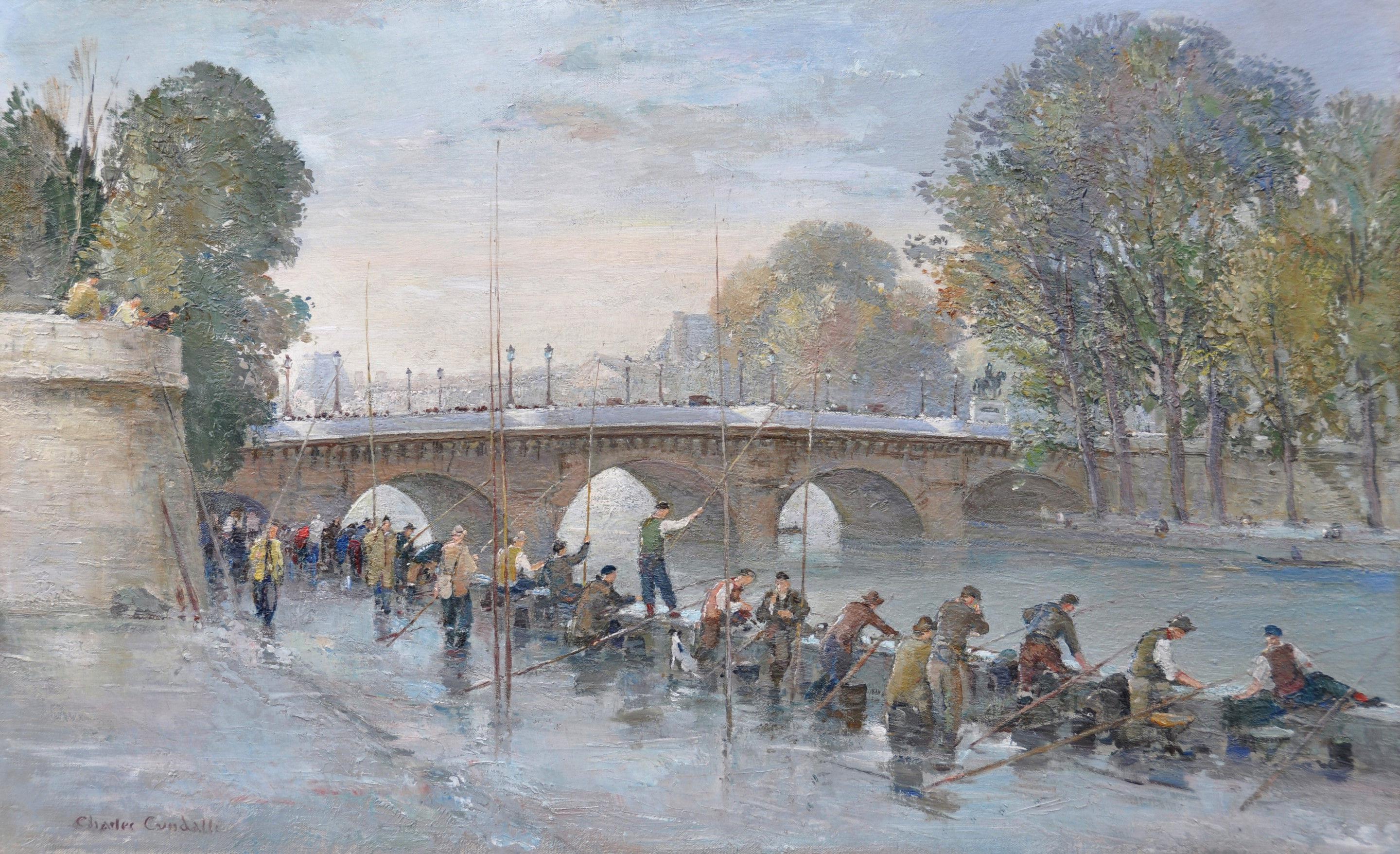 Oil on canvas, signed, in a carved wood wash-stained frame

Charles Cundall was a talented and widely-travelled artist who specialised in panoramic landscapes, town and crowd scenes and portraits in both oil and watercolour and was also a designer and painter of stained glass and pottery.

He was born in Stretford, Lancashire on 6th September 1890 but spent some of his childhood in the Philippines and Australia. His first foray into the artistic world was working as a designer under the instruction of Gordon Forsyth at Pilkington's Pottery Company. He also studied at the Manchester School of Art, winning a scholarship in 1912 to the Royal College of Art in London. His training was interrupted by the outbreak of the War in 1914 and he served in the Army with the Royal Fusiliers during the conflict from the beginning until he was severely wounded in 1917. After recuperation, he returned to the RCA in 1918.

From 1919 to 1920, Cundall was at the Slade School of Fine Art before going to Paris and then Italy for further studies. He exhibited his first painting at the Royal Academy in London in 1918, a venue at which he exhibited a further 59 times, being elected a full member in1944. He exhibited extensively in other venues including, among others, 81 at the New English Art Club, 23 at the Manchester City Art Gallery, 34 at the Royal Society of Painters in Watercolours and many at the Leicester and Grosvenor Galleries in London.

His travelling is reflected in some of the titles of his paintings which include among many others; "Arrival at Freetown, Sierra Leone", "New York from Brooklyn", "Quebec, Canada", "The Acropolis", "Italian Landscape", "Segovia, Spain", "Bantry Bay, County Cork", "Quai des Grands Augustins, Paris" and "Pont Neuf, Paris" as well as views in Sweden and Russia.

He was particularly adept at crowd scenes and paintings such as: "Hastings Cricket Festival", "Bank Holiday, Brighton" (in Tate Britain), "A Chelsea Cup Tie", "London Zoo, Elephant Walk", "Demolition of Waterloo Bridge, 1935" and "Furnace/Smelting at a Steelworks" attest to this. During the Second World War, he worked for the War Artists' Commission and in 1940 was appointed an official artist to the Air Ministry and also the Royal Navy. This resulted in many evocative pictures of action and military hardware as well as touching portraits of serving personnel. "HMS Exeter at Plymouth in 1940, back from the Graf Spee Action", "A U-Boat surrenders to a Hudson Aircraft", "Lancaster Bomber", "Dunkirk withdrawl" and "Air Gunner prepared for action " are just a few represented in public collections such as the Imperial War Museum.

Royal occasions also feature and following the cessation of the War, Cundall travelled with one of the escorts which accompanied the Royal Family on its visit to South Africa aboard the battleship HMS Vanguard

Cundall spent the majority of his working life living in Chelsea with his artist wife, Jacqueline Pietersen who painted figure subjects and exhibited at the New England Art Club, the Royal Academy and the Society of Women Artists. He died on 4th November 1971. Apart from the museums and government collections already mentioned, Cundall's paintings can be seen in the National Museum of Wales, Salford Museum, the National Maritime Museum in Greenwich, Manchester City Art Gallery, Bradford Museum, Hastings Museum and Art Gallery as well as others.

Original and in a carved wood wash-stained frame