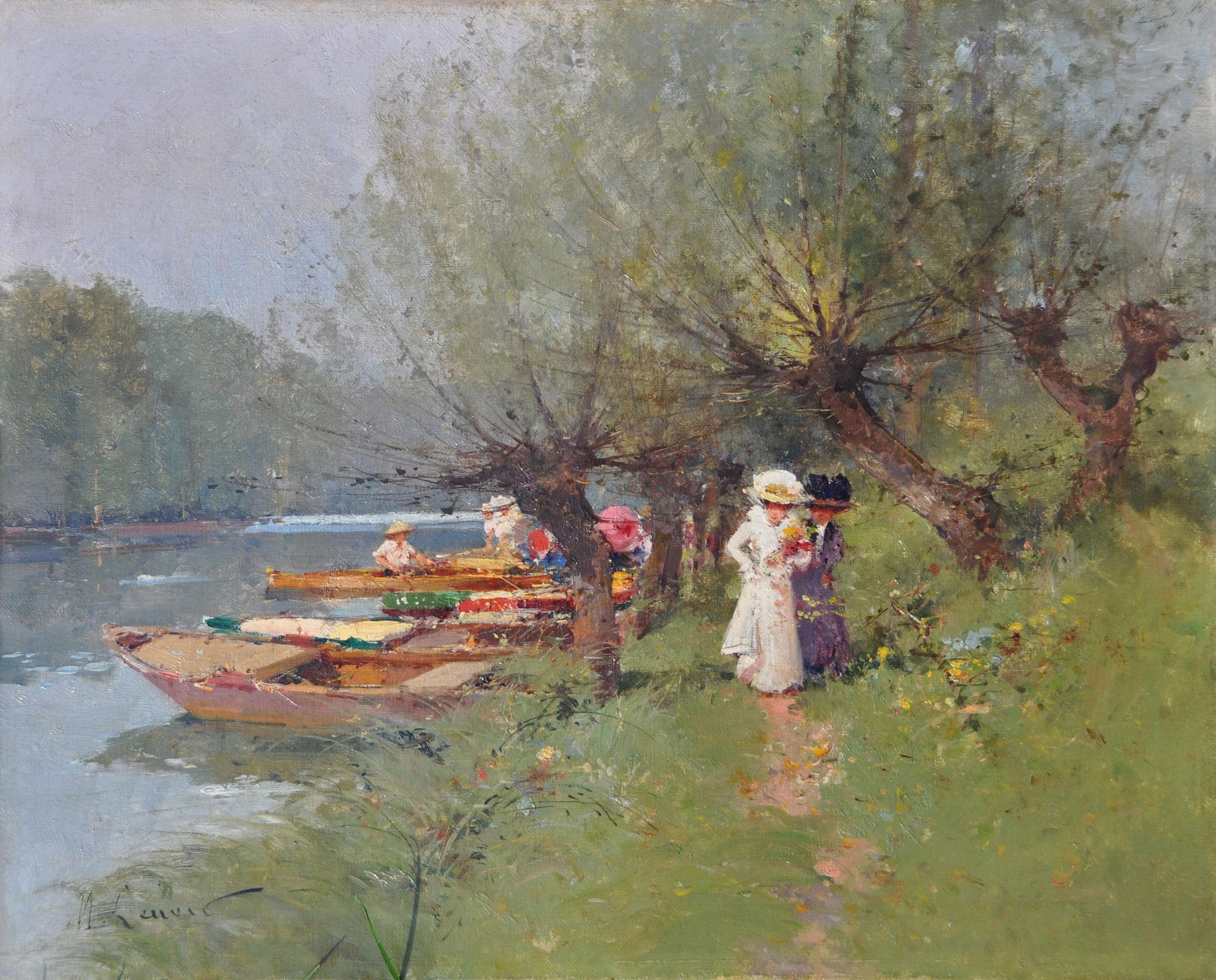 Born in Rue Leonie, Montmartre in Paris on 11th December 1854, Eugène Galien-Laloue was the first-born of Charles Laloue and Marie Eudoxie Lambert who had married the previous December in Batignolles, Paris.

His father was a painter and a designer of stage-sets and gave his son initial artistic instruction but he then studied under the Barbizon landscape painter Léon Germain Pelouse (1838-1891). However, following the death of his father in 1870, Eugène had to leave school and find employment to help look after his eight younger siblings. His mother had enabled him to obtain a job at a notary's but it is believed that he left this to join the army, lying about his age and serving in the Franco-Prussian War which lasted for six months ending in January 1870.

By 1874 he was employed by the French Railway Company as an illustrator, recording the areas through which the tracks were laid. Travelling extensively in Paris, its suburbs and then further afield as the railway system expanded, allowed him to view the urban and suburban scenery in great detail and he began to record these in conjunction with his official work.

It was at this time that he stayed in Fontainebleau with some other artists including Charles Jacques and he concentrated on painting the landscapes and surrounding villages at sunrise and sunset. This fascination with light effects and the long shadows cast by a low sun, was transferred later into his best-known subject matter of depicting Paris. He increasingly was drawn to painting the city and its people as they thronged the boulevards. His street scenes are animated with these figures and he was particularly fond of portraying the streets when they were wet so that the lights would be reflected, further enlivening the picture.

By 1877 he had built a sufficient body of work to exhibit as a painter and showed for the first time at Le Salon des Artistes Français. He had expanded his subject matter to include the landscapes of Normandy, Seine-et-Marne, Marseilles and some views of Venice but as his career developed, he increasingly became a significant recorder of Paris, portraying the streets, boulevards and squares around the Louvre, Bastille, Notre Dame, Les Halles, L'Arc de Triomphe and Montmartre, often with flower markets or fêtes, omnibuses and carriages. The ports along the Seine such as Saint Denis and Saint Martin with figures on the quays with numerous moored boats was also a theme he recorded. He was the first artist to depict Paris in this manner in the early part of the twentieth century leading up to the First World War and was followed later by others such as Édouard Cortès and Antoine Blanchard. He worked mainly in gouache, paying particular attention to the topography and the architectural perspective and captured the scenes in all weathers. He favoured gouache probably because it is so easy to set up and use, dries quickly so that other layers can be added soon after, can be reworked but has a density of colour closer to oil than watercolour.

In 1914, Galien-Laloue became a war artist, recording military scenes mostly in watercolour and pencil drawings but it is for his evocation of Paris in the early 1900s that he is most renowned. He utilised several pseudonyms to paint sometimes similar works to his Parisian subjects but utilising a different name allowed him also to work in a slightly different style and produce some typically post-Impressionist subject matter in a more plein-air setting. These names include: Eugène Galien, Eugène Dupuy, L Dupuy, M or Maurice Lenoir, J or Jacques Liéven, E Galiani, F Giusta and E Lemaître among others. It is thought that he was exclusively under contract to produce his Parisian gouaches to one gallery and by using other names, he could sell through other outlets. Some of his paintings produced under a different name are done in oil paint - like the ones in the name of M (Maurice) Lenoir - which has more depth but requires more time and effort. Likewise,it could be that he just wanted to challenge himself more and return to some of the painting that he was doing in his early career and paint something different from what he was renowned for. Most of the works signed as Lenoir are done in oils, often on panel and some examples are: Elégantes sur la plage de Quiberville, Le marche de Mortagne dans l'Orne, Une ville Mediterranéene and Retour de pêche au Tréport.

He was widowed three times and had one daughter Flore who was born in 1893 and it was with her, in her home in Cherence, Val d'Oise, that he spent his later years, dying there on 18th April 1941.