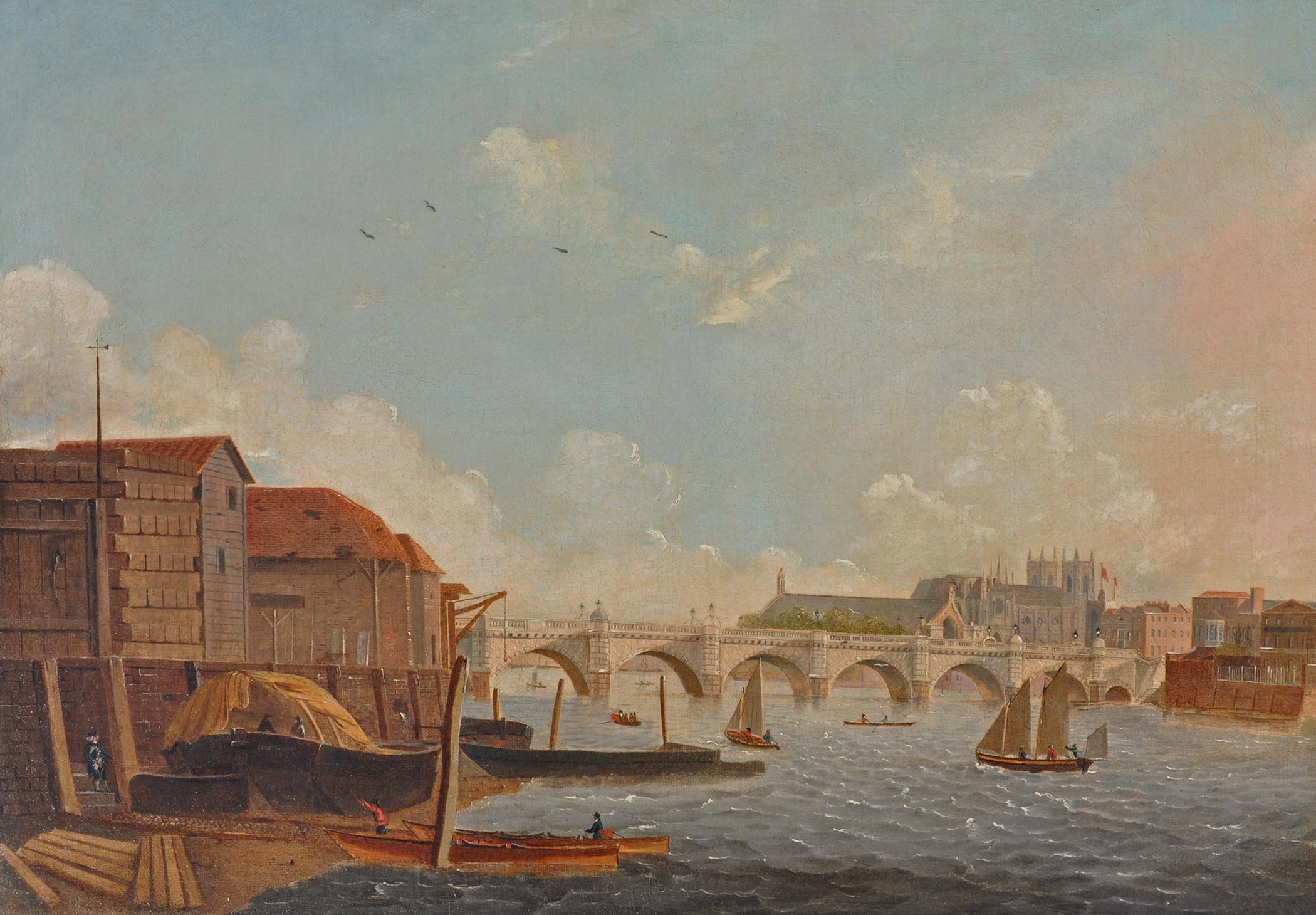 Oil on canvas, signed and dated 1803, in carved giltwood frame


There is very little known about the life of Daniel Turner: when and where he was born, who instructed him in painting or even when he died, but his legacy is an accurate portrayal of London, particularly of the Thames, and of the buildings and industry it passed through the city.

In his "Dictionary of British Landscape Painters" the art historian M H Grant writes: "One of the most charming painters of numerous views of London, which are almost the only relics of a vanished career. In these he may be styled an urban miniaturist, his paintings being of the smallest and neatest, faithful to every brick in the wall, yet so prettily coloured as to render them objects of art as well as of topographical interest."

He painted a few watercolours but most of his work was in oils, some on wooden panels as well as on canvas, and although it is true what Grant says of the majority of his paintings being on the smaller scale of between 5 and 16 inches in height and 8 and 24 inches wide, he did produce some large works of up to about 32 x 50 inches. Two such examples are: "Nelson's funeral procession on the Thames, 8th January 1806" which is the National Maritime Museum and the Tate's "Old London Bridge" both of which are over 40 inches wide.

Turner painted predominantly London scenes and the majority depict the old city area, in particular around Westminster, St Paul's, the Tower of London, Southwark, Lambeth, London Bridge, Somerset House and Adelphi Terrace but he did venture as far east as Chatham and west as Hammersmith Bridge and Richmond Bridge. There are also some views of outside the capital including, Gosport, some Scottish scenes, Oxford, Peterborough Cathedral and even one of Rouen Cathedral (these last two were etchings for which he was also well known) but whether he visited France or found inspiration from another painting is not known.

He exhibited ten paintings at the Royal Academy, all views of London, between 1796 and 1801. He also showed seven works at the Free Society in 1782 and 1783 but these were of different subject matter. The oils were river scenes outside London and one was just titled "Shipping". However he also showed some miniatures depicting portraits and it is probably the exactitude essential in painting a small head study which proved so useful in faithfully recording the architecture of London. He sent his exhibits firstly from an address in Snow Hill, (what is now the area around Holborn and Smithfield), and then from addresses in Millbank.