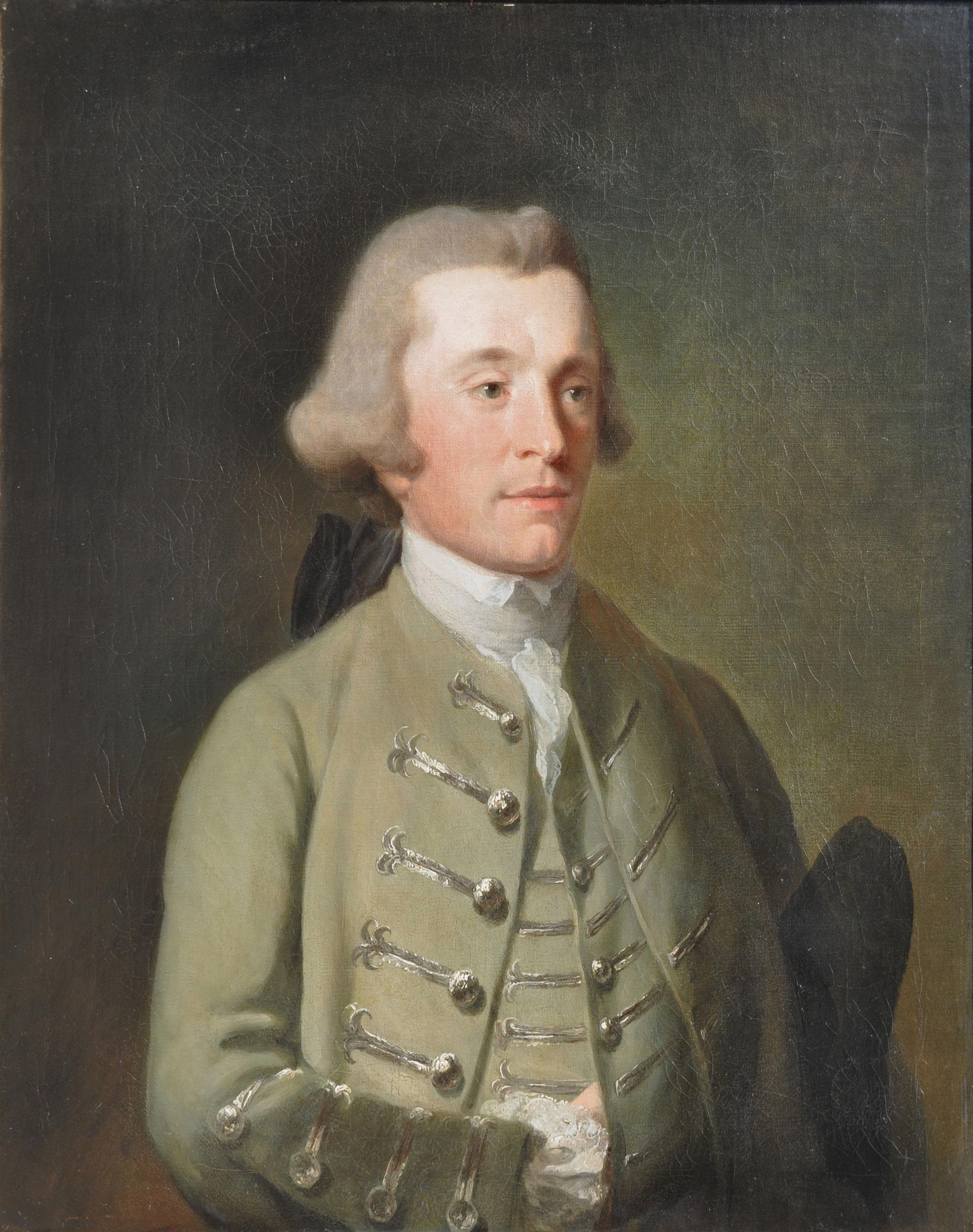 Robert Edge Pine was one of London's leading portrait painters in the 1760s and even before then he was described in the November 1748 edition of the Universal Magazine as an "eminent painter". He portrayed royalty and was one of the first painters to do portraits of actors and when he emigrated to America in 1784, he depicted some of the key figures from the American War of Independence.

He was the son of the the engraver John Pine (1690-1756) and was born in London probably in the late 1720s. It is probable that Robert received his initial artistic instruction from hs father but little else is known about his formative years or who else might have trained him. In Vertue iii, the notebooks of George Vertue published by the Walpole Society, it states that in 1742 there was a "young Pine" who was "brushing off (crayons) at a guinea a piece". This was probably written about Robert or it possibly refers to his brother Simon who became a miniature painter.

In 1759 Pine was commissioned to paint a portrait of George II and this turned out to be a remarkable work especially as it was done without sittings. On 2nd April 1760 he was awarded the top premium (100 guineas) from the Free Society of Arts for his "Surrender of Calais to Edward III" and again in 1763 for the depiction of "Canute the Great reproving his courtiers for their impious flattery" by the same institution. He continued to exhibit some history paintings alongside portraits in London until the late 1760s with 29 at the Roayl Aacademy, 11 at the Free Society of Artists and 10 at the British Institute. Apart from painting the nobility, gentry and wealthy merchant classes, he also took a keen interest in the theatrical world and was one of the first to do renditions of actors in character roles such as "Mrs Pritchard in the character of Hermione in the Winter's Tale", "Mr Reddish in the character of Posthumus , Cymbeline, act the fifth, scene the last" together with several portraits of David Garrick who was a friend. In 1782 he painted a series of scenes from Shakespeare of which some were engraved, appearing in Boydell's "Shakespeare".

Pine moved to the highly fashionable city of Bath in 1772, remaining there until 1779. Bath was a gret source of patronage for portraitists but although he had been exhibiting mainly portraits in London up until this time, he returned to history painting in his new home while also continuing as a portraitist. The relocation to Bath might have owed something to his not being appointed a founding member of the Royal Academy by Sir Joshua Reynolds.. Several reasons for this have been posited: for some it was because Pine was a difficult individual of very small stature, cantankerous, disagreeably temperamental and irritable. Others claim that it was because Reynolds perceived him as a threat for pre-eminence as a potraitist but others claim that it was as a consequence of Pine's espousal of 'radical' causes such as the American War of Independence and support for the politician and libertine John Wilkes as well as painting such subjecs as "Earl Warren resisting the Quo Warranto statute" which was perceived as supporting a political belief rather than being just a history painting.

It was in Bath that he produced his most ambitious group portrait, the "Family of the 1st Lord Bradford". Besides working on the aforementioned Shakespearean series, it was one of his allegorical paintings done in Bath which may well have led later to a significant change in his life. He was already sympathetic to the American cause and in 1778 he painted "America" which showed a suffering America attended by Liberty, Plenty, Concord and Peace. He had already met George Washigton's friend George William Fairfax who was living in Bath and had been commissioned to paint the children of the London merchant Samuel Vaughan who was a friend of Benjamin Franklin.

Pine returned to London and in 1782 held an exhibition of the Shakespearean history pictures which was not successful. This disappointment, combined with his political leanings and the contacts that he had made in Bath, were enough impetus for him to emigrate to America in 1784. He had made initial enquiries to Samuel Vaughan's son John enquirng in a letter in April 1784 (now in the Dreer collection, Historical Society of Pennsylvania): "…the present state of the country, with respect to the disposition and ability of its inhabitants for giving encouragement to Painting, either at Portraits or in perpetuating to Posterity the many glorious Acts which honours the name of an American."

Fairfax also gave his support, writing with introductions and recommendations to his friends in America and especially Washington to whom he also sent a print of "America." Pine took his Shakespearean paintings with him and upon his arrival in Philadelphia was given permission to use one of the rooms in the State House as a studio and exhibition space. He exhibited his theatrical paintings and the works were accompanied by a printed descriptive pamphlet which is credited with being the first exhibition catalogue in America. His wife, who had joined him eighteen months later and was the sister of the watercolourist Alexander Cozens, had a drawing school there also.

He had resolved to paint portraits of the leaders of the Revolution and also to produce a series of works depicting the events of the Revolution and was one of the first to undertake such a project. He never completed this grand scheme however but he did complete portraits of George Washington (later engraved for Washington Irving's "Life of Washigton" and also of Benjamin Franklin, George Read, Charles Carroll, General Gates, and Thomas Stone among others. Pine had the patronage of the financier Robert Morris but of the narrative series of the War itself, only one was completed. This was "Congress voting Independence", later engraved by Edward Savage and the original painting, together with many other works by Pine which had been in his studio at the time of his death, was acquired by the wax modeller Daniel Bowen. Bowen exhibited them in his Columbian Museum from 1792 in Philadephia, New York and Boston where they were destroyed in a fire in 1803.

Robert Edge Pine's paintings display a superb use of colour and stylistically he is more like Nathaniel Hone than any other contemporary. His portraits are quite distinctive with the sitter nearly always viewed slightly side-on in three-quarter profile so that the side of the head appears as an elegant semi-circle. He also employed a time-saving device - also utilised by other artists - when working on group portraits in particular whereby he would paint the sitter's head on a small canvas but do a pencil sketch of the rest to be completed later. Rembrandt Peale writing in 1865 states that: "His custom was, on small, thin pieces of canvas, to paint the heads of his sitters, making on paper pencil sketches of their figures, so that on his return home, having pasted his heads upon larger canvases, he and his two daughters could rapidly finish them." There are also twenty-two examples of American portraits where Pine, rather than attaching the small completed head portrait to the larger unfinished canvas, would insert it into a pre-cut space of identical dimensions.

Robert Edge Pine died suddenly of apoplexy on 18th November 1788, only four years after his arrival in America. He had a significant influence on American panting and left one pupil, Charles Wilson Peale, to continue his legacy. In England his pupils had been the portrait painter Nicholas Farrer (1750-1805) and the major history painter John Hamilton Mortimer (1740-1779).

Some other examples of paintings by him include: "Earl of Northumberland laying the foundation stone of the Middlesex Hospital", "Lord Rodney in action, aboard the the Formidable, attended by his principla officers", "A portrait of a gentleman educating his daughter", "A portrait of three young ladies gathering cherries", "A portrait of a lady as a Roman matron sacrificing to Jupiter Conservator" , "A mad woman", "Francis Hopkinson, signer of the Declaration of Independence", "Samuel Vaughan, President of the American Philosophical Society"

Cambon was a lawyer by profession and following military service in the Franco-Prussian War, entered the civil service in 1871. He held a junior post in the administration in Algeria in 1874 before being appointed to the prefecture of Nord département in 1882 and then to the Rhône from 1887 to 1891 when he was sent back to Algeria to become Governor General.

In 1897 he was appointed the French Ambassador in Washington DC and was involved in the initial negotiations on behalf of the Spanish government which brought the war between Spain and the United States to an end at the Trteaty of Paris in 1898. These negotiations helped forge a strong link between Spain and France and in 1902, Cambon was transferred to Madrid before being relocated to Berlin in 1907. He remained as the French Ambassador there until the outbreak of the First World War.

He was a strong advocate for the entente cordiale between Briatin and France and in his position in the French foreign ministry during the war, worked hard to strengthen the ties with Britain. In this capacity, he was also involved in the secret negotiations over the settlement of the Palestine question following the defeat of the Ottoman Empire. He was an adviser to Alexandre Ribot, the French Prime Minister and consequently was involved in the Sykes-Picot Agreement. He was privy to much political and military intelligence shared between the two powers which also was dealing with the collapse of Tsarist Russia and the rise of Bolshevism.

His brother Paul was also a diplomat and was Ambassador to the Court of St James's in London from 1898 to 1921 and also promoted the entente cordiale like his brother.