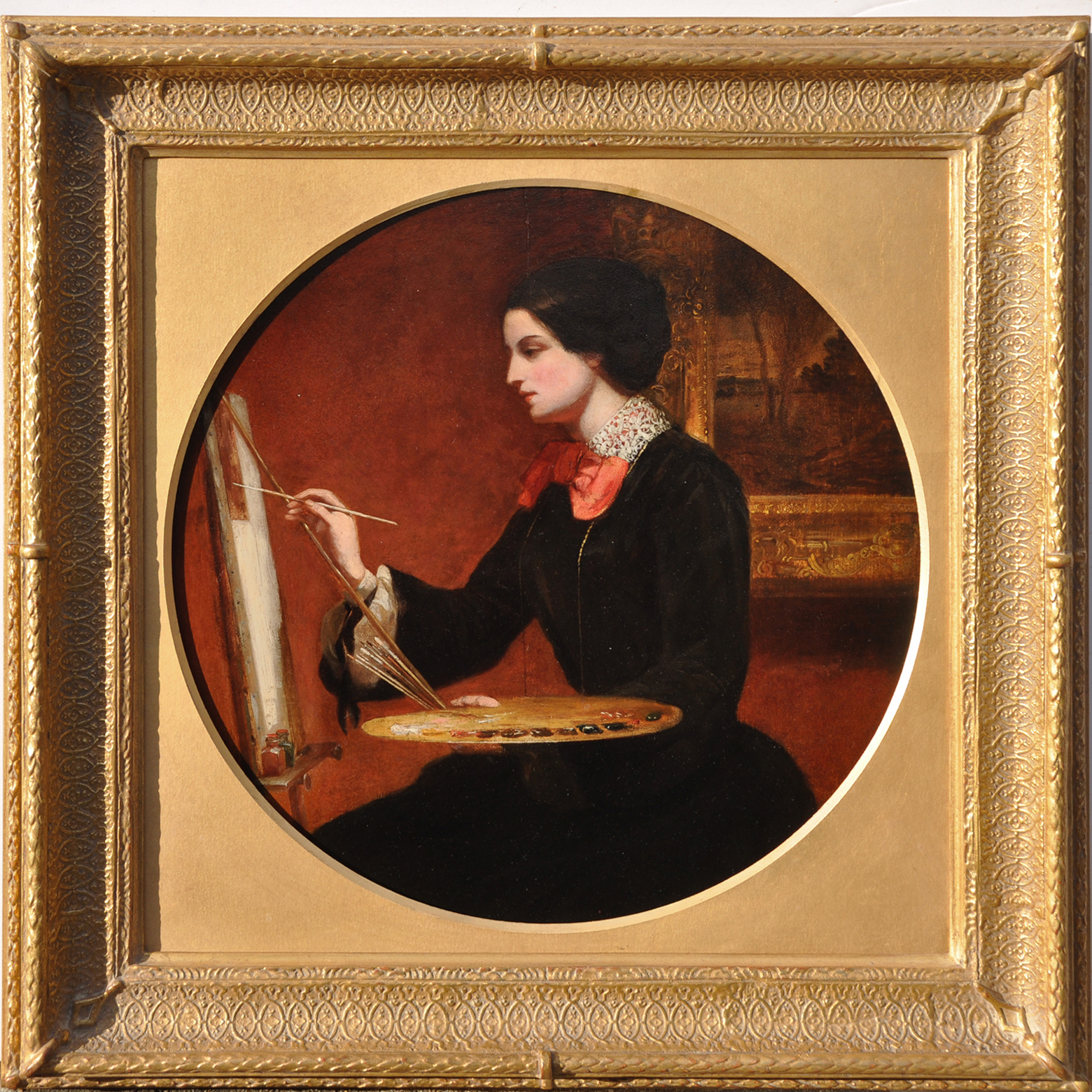 Oil on panel, painted tondo, signed and inscribed on reverse

Possibly the picture exhibited at the British Institution in 1852, no. 173

J D Wingfield – also sometimes recorded as James Dignam or Dignum - was a painter of interiors, portraits, historical subjects and landscapes as well as being an occasional draughtsman for wood engravings and etchings. M H Grant says of him that he was “…a would-be British Watteau, painting courtly garden fêtes and elegant assemblies, often in the costume of the Carolean age, also palace interiors, their saloons crowded with aristocrats gorgeously costumed.”

He was born on 20th October in Westminster to Francis Wingfield and his wife Susanna, née Wilds, who had been married on 21st November 1808 at St Mary’s in Marylebone. James was baptised on 19th November 1812 at St James’s in Westminster. It is not known who gave him instruction in painting but he exhibited his first painting, as a twenty year old, in 1832, at the British Institution. This was A view of Kingston Bridge and was sent from an address in Gray’s Inn in London. In the same year, he also showed his first work at the Royal Society of British Artists which was A collier stranded, Brighton. Wingfield’s first exhibit at the Royal Academy was Portrait of a lady in 1835 but he went on to show thirty-eight paintings in all there with a further forty-one at the RBA, ninety-four at the BI, six at the Suffolk Fine Arts Association and thirty-nine at other exhibition venues.

On 27th December 1836, the young artist married Elizabeth Booth at March in Cambridgeshire and the marriage certificate, like his baptismal registration, has him recorded as being James Dignam Wingfield. It is thought that the use of the name Digman stems from a misspelling at one or more of the exhibition venues so that it has persisted ever since in the art world. However, the indignity of the erroneous recording of his name persisted at his death when he was buried at Brompton Cemetery in London on 20th April 1872 and his name is given as James Dignum Wingfield.

Although he is probably most renowned as depicting scenes in a historical setting, often based in or around Hampton Court, Wingfield, in his earlier years, often painted portraits such as The Falconer, The Fisherman’s Daughter and Belinda. He travelled in France, the Netherlands and Italy in addition to his journeys around England, Wales and Scotland and the ensuing landscapes resulting from these travels also formed a proportion of his work. Exhibited titles include Windermere, calm evening, On the Thames, Medenham, A summer’s day, Bushy Park; Boats off Brighton and Le Jardin Anglais à Fontainebelau.

The Wingfield family, comprised of James and Elizabeth and six children, were living in Chelsea in the 1840s but by the late 1850s were in a residence off Fitzroy Square. His career was successful and his paintings at the RBA and the BI commanded prices between £10 and £100 which were significant amounts at that time. He was increasingly painting more complex scenes often with a historical context, set in gardens or interiors.   His travels in Europe and interest in the works of the great masters, had left him with an erudition which he translated into his paintings. In The Painter’s Studio of 1856 (with Christopher Wood in 1990), in which the model is possibly the same sitter as used in our painting as there is a resemblance, the shelves around the studio are brimming with great statues and busts preserved from antiquity and the Renaissance and which Wingfield must have sketched when in Paris, Rome and Florence. These include the Uffizi’s Venus de Medici and also the Dying Alexander, Michelangelo by Daniele da Volterra from the Palazzo Spada, Cupid and Psyche from the Capitoline and Silenus and the infant Bacchus from the Louvre among others. In his large painting of the Picture Gallery at Stafford House in St James’s, produced in 1848, he included works by many great masters including Guercino, Zurberan and Murillo.

Some other examples of these interior and historical works include: Interior of the Great Exhibition Hall of 1850; Opening Ceremony of the Great Exhibition of 1850; Scene from the first part of Henry IV, act ii, sc.4; The Chapel Royal, Hampton Court; The Cartoon Gallery, Hampton Court and John Birnie Philip’s Studio, Manresa Road. Because of their popularity, some of these paintings were turned into prints such as Summer noon, Hampton Court engraved by Charles Causen in 1854 and this has endured into contemporary times when the cover of Roger Lockyer’s Tudor and Stuart Britain, 1485–1714, published in 2005, had Wingfield’s 1849 painting of the Female Portrait Gallery in Hampton Court as its cover.

He died at his home in 40 Christchurch Street, Chelsea, London on 14th April 1872 and his son Hubert and his wife acted as his executors, selling all of his works at an auction held at Christie’s in 1873. Examples of his paintings can be seen in the following venues: Royal Collection Trust – Hampton Court; Royal Hospital, Chelsea; Courtauld Institute; Government Art Collection; Chelsea Library; Bank of England Museum; Nottingham City Museum and Art Gallery; Calderdale Metropolitan Borough Council; Hunterian Art Gallery, University of Glasgow; National Library of Wales.

The Dictionary of Painters – Christopher Wood