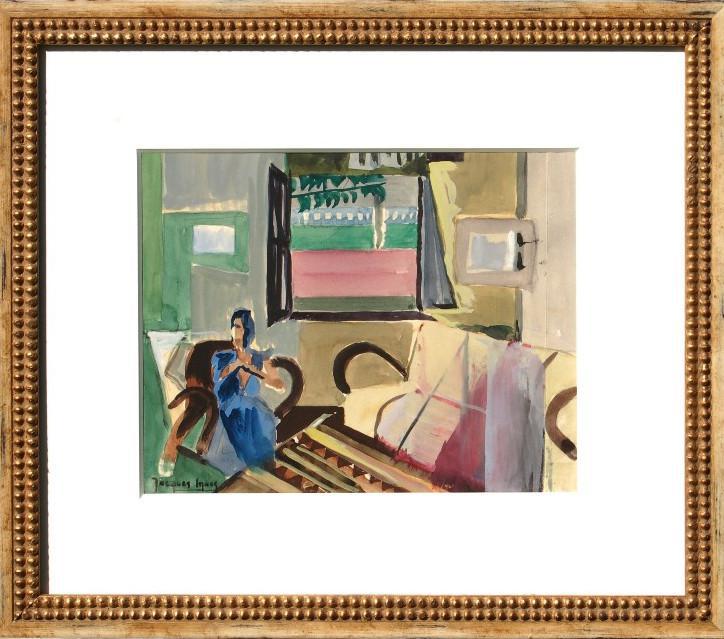 Jacques Maes was a painter of figures, portraits, landscapes and still-lifes, draughtsman, muralist, stained glass designer and engraver who was born in Ixelles in the Brabantine region in 1905.

He undertook his artistic training firstly at L'Académie Royale in Brussels from 1920 to 1924 under the tutelage of Herman Richir, Constant Montald, Gisbert Combaz and Jean Delville. He then attended L'Académie Saint-Josse-ten-Node where he was a pupil of Louis van Lint, Anne Bonnet and Gaston Bertrand who founded and were members of the artistic group, "La Route Libre".

Initially, Maes painted in a post-Expressionist style and his subject matter tended towards portraits, figures and still-life. He lived in Lima in Peru between 1946 and 1948 and his stay there influenced him considerably. The dazzling natural effects and the intense light there inspired him to use a warm and limpid palette and he structured the paintings so that the application of the colours was deliberately two dimensional, lacking perspective, so that each part of the picture seemed to grow out of the other. The result of this was that shortly after World War II, he almost could be described as an abstract artist but he never fully committed himself to this movement and eventually his style evolved into one which was intimately structured and imbued with a poetic realism.

In 1930 he came second in the Prix de Rome and in 1935 created some decorated panels for L'Exposition Universelle whch was held in Brussels and he also exhibited at the Venice Biennial, Palais des Beaux Arts and in San Paolo among others. He produced more or less in equal measure paintings, designs for tapestries and murals.

From 1936 he was teaching at L'Académie de Saint-Josse-ten-Node and was also its professor. Between 1950 and 1968 he was professor at L'Académie de Bruxelles and during his sojourn in Peru, he gave instruction in an atelier in the Academy in Lima.

He was a modernist who nonetheless remained a figurative painter who was particularly interested in intimate subjects but which still retained a certain monumentality. This actually makes him one of the fathers of Animism.

He died in an accident in Benicarlo, Spain in 1968.