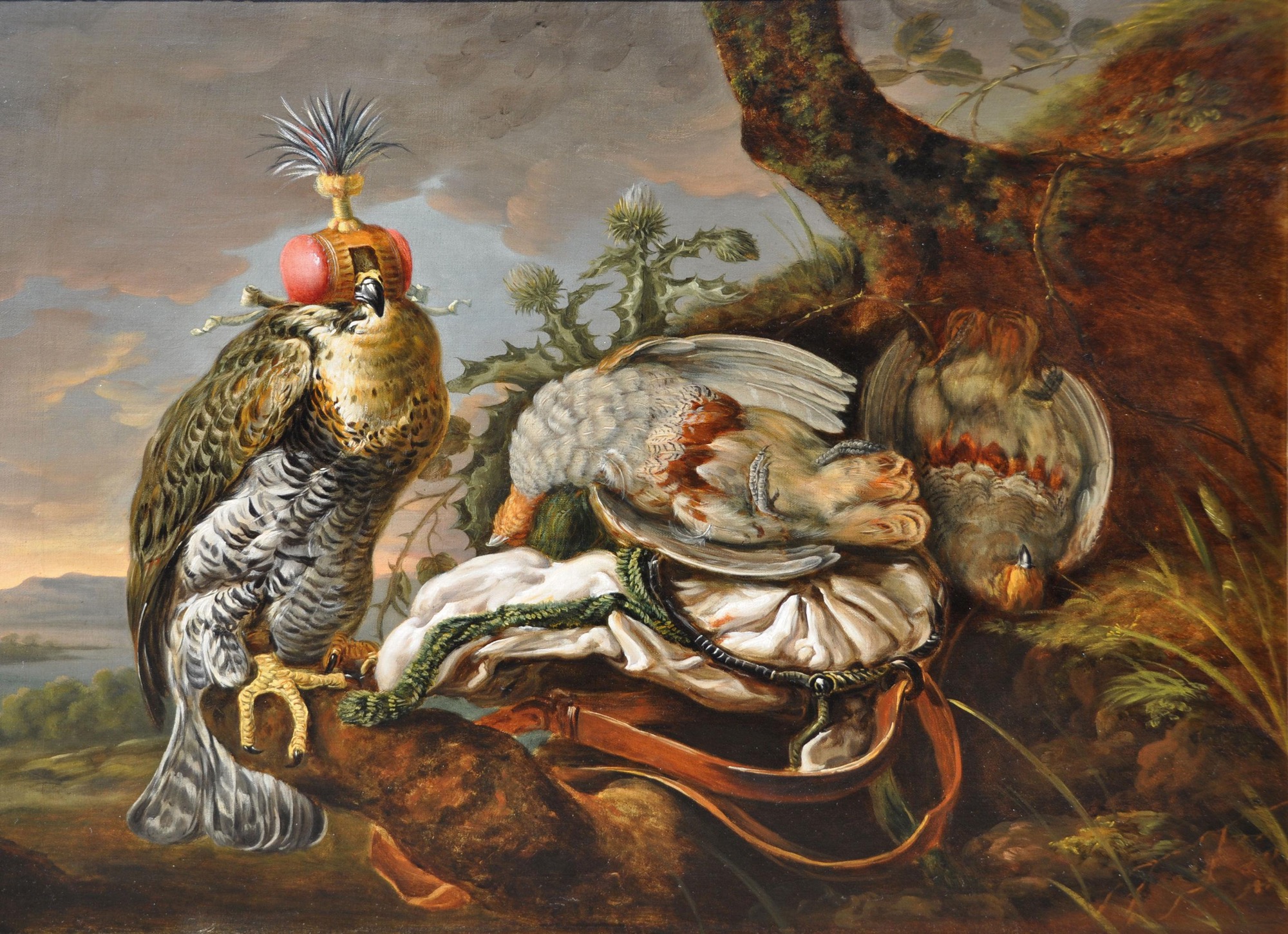 The same composition, but with slight variances, and of similar size to the Pieter Boel in Sotheby’s Paris 25th June 2008.

Pieter Boel, also called Boele or Boule, was born in Antwerp in 1622, and was baptised in that city in October. He was the son of the engraver Jan Boel and the nephew of the genre and battle-scene artist Cornelis de Wael and Pieter's brother, Quirin Boel II, became an engraver. He received his artistic instruction firstly from his father and then from the renowned Antwerp animal, still-life and flower painter Jan Fyt (1611-1661) who himself had been apprenticed to the important animal and still-life artist Frans Snyders.

He travelled to Italy in the 1640s and is believed to have visited Rome and lived with his uncle Cornelis de Wael in Genoa as the latter had established himself in that city as a painter and art dealer. However Pieter was back in Antwerp by 1650 and he became a master in the Antwerp Guild of St. Luke in 1650/51 where he was registered as a wijnmeester, - wine master - a title given to those who were the offspring of established guild members.

Boel continued the influence of Snyders and Fyt, specialising in animals such as dogs and poultry as well as hawks and still life with a strong theme of hunting trophies with dead game and to a lesser extent, fish. He also produced some flower still-life and others of weapons and vanitas paintings. He occasionally contributed the animals to the large canvases of the Rubens influenced Caspar de Crayer (1584-1669) and animals for the landscapist Jan Wildens (1586-1653) as well as collaborating with his master Jan Fyt.

Boel differed stylistically from Fyt in that his brushwork is broader but some of the former's paintings have been erroneously ascribed to his master. Pieter Boel's early paintings employ muted tones and he enthusiastically utilised them to convey onto canvas his fascination with the effect of light and shade. He had become enamoured with these shifting contrasts while working in Italy and had been influenced by the still-life painter Guiseppe Recco and the figure and religious artist Giovanni Benedetto Castiglione. Both of these artists emphasised the shadows to augment the dramatic effect of the painting.

Boel had several students including two sons Balthasar Lucas and Jan Baptist as well as the bird and animal painter David de Coninck and Nicasius Bernaerts whose work is very similar in style and content to his teacher. He was a significant influence on the major French animal painters Alexandre François Desportes (1661-1743) and Jean-Baptiste Oudry (1686-1755) and consequently he was a significant influence on the development of French animal painting.

This connection with French animal painting ensued from Boel's journey to Paris and sometime after 1668, he was resident in the capital. He worked at the Gobelins firm of tapestry manufacturers under the instruction Louis XIV's court painter Charles le Brun (1619-1690) where he painted cartoons to be made into tapestries depicting birds, animals, fruit and vegetables. It was through this commissioned work that he met and befriended Adam Frans van der Meulen, (1632-1690), the Brussels-born painter of battle scenes who travelled with Louis XIV on his European campaigns recording the engagements. With the consequent sobriquet Maître de Batailles, van der Meulen also worked with Le Brun and with Gobelins where some of his battle scenes were turned into much sought after tapestries.

Pieter Boel's success in this work resulted in his being awarded the title Peintre Ordinaire du Roy. He portrayed about a hundred different species in these designs and cartoons of which about a quarter were native to Europe, the rest taken from the King's menagerie at Versailles It was studying the animals in a natural and semi-natural environment and the resultant natural feel with which he imbued them, which made Boel's work so radical and influential. Gobelins recognised the significance of this and retained his studies and paintings in their collection. There are eighty-one studies known to have been definitely Boel's work and nine of these are held in the collection of La Musée de la Chasse et de la Nature in Paris.

Some of Pieter Boel's works were engraved with W Hollar producing a work after a still-life of dead hares in 1649 among others and L Vosterman also engraved some of his paintings. The artist himself etched two series depicting birds comprised of six plates in each under the title Diversi uccelli a Petro Boel.


The Peregrine is regarded as second only in dignity to the Gyr Falcon in the list of "noble" birds of prey and, because it is more easily obtained from the wild than the Gyr, could be considered the special bird of falconry in England and France. In F H Salvin's and William Brodrick's Falconry in the British Isles, they write that: "The Peregrine…has at all times, and in every country where the art of Falconry is practised, been most highly valued for its docility, swiftness, courage, and hardiness of constitution." They continue: "…is provincially known by several names as the 'Hunting Hawk.' In Ireland and in North America it is called the Duck Hawk; and on the south coast of England, about the Isle of Wight, it is known as the 'Broad Arrow', from its assuming that form in its perpendicular stoop."

The word Peregrine derives from foreigner on account of its wide dispersion across the globe and likewise, for this, it is known in France as Pélerin (pilgrim). In the Rev C A Johns' British Birds in their Haunts, (1909), he writes: "It is a bird of haughty aspect and rich colouring, sagacious, powerful, and daring; a type of the chivalry of the Middle Ages, a veritable knight-errant, always armed, and ready to do battle in any cause, against all comers."

The peregrine has a body length of between 34 -58 cms (13-23 ins) and a wingspan from 74 -120 cms (29-47 ins) depending of the sex of the bird as the female can be up to almost a third larger in size than the male. The adult's upper plumage on the body and wings is dark bluish grey with darker bands and the head is bluish black. The lower plumage is white with the breast transversely barred with brown and the feet are yellow with black claws as is the beak. The tail is narrow and rounded at the end, the feathers are coloured like its back but the bars are narrow and more distinct and the tip is black with a white band at the very end.

It is renowned for its astonishing eyesight and velocity during the stoop or dive when it can attain speeds of over 320 kmph (200 mph). In its natural environment its diet is predominantly medium-sized birds but it will predate small mammals, small reptiles and even insects if necessary. Its habitat in the wild is cliff edges and latterly tall buildings in urban environments. It has an ardent hunting ability which, allied to its speed, manoeuvrability and comparative ease of training, makes it a highly respected falconry bird and it has been utilised in hunting for over 3,000 years with the first examples believed to be in Central Asia. The natural flying style, where it circles above the handler while waiting for a quarry, makes it ideal for falconry.

When the hawk strikes a prey in mid-air, it hits it at great speed with clenched claws which knocks the prey senseless and its beak, which has a notch in the upper half, enables it to sever the prey's spinal column near the neck which is most efficient. They often work in pairs in the wild and this has been replicated in falconry where a pair can bring down a much larger bird. C A Johns writes: "The art of the falconer is to intercept the Heron when flying against the wind. When a Heron passes, a cast, or couple of Falcons, are thrown off, which dart into the air, flying in a spiral direction to get above the Heron. As soon as the first has attained the necessary elevation, she makes a stoop, and if she misses, a second stoop is made by the other in turn. When one has succeeded in striking its prey, the other joins in the attack, and all three birds come to the ground together, buoyed in their descent by their expanded wings. There is a description of a peregrine attack on herons in Edmund Spenser's 1590 epic poem The Faerie Queene.

The same composition, but with slight variances, and of similar size to the Pieter Boel in Sotheby's Paris 25th June 2008.