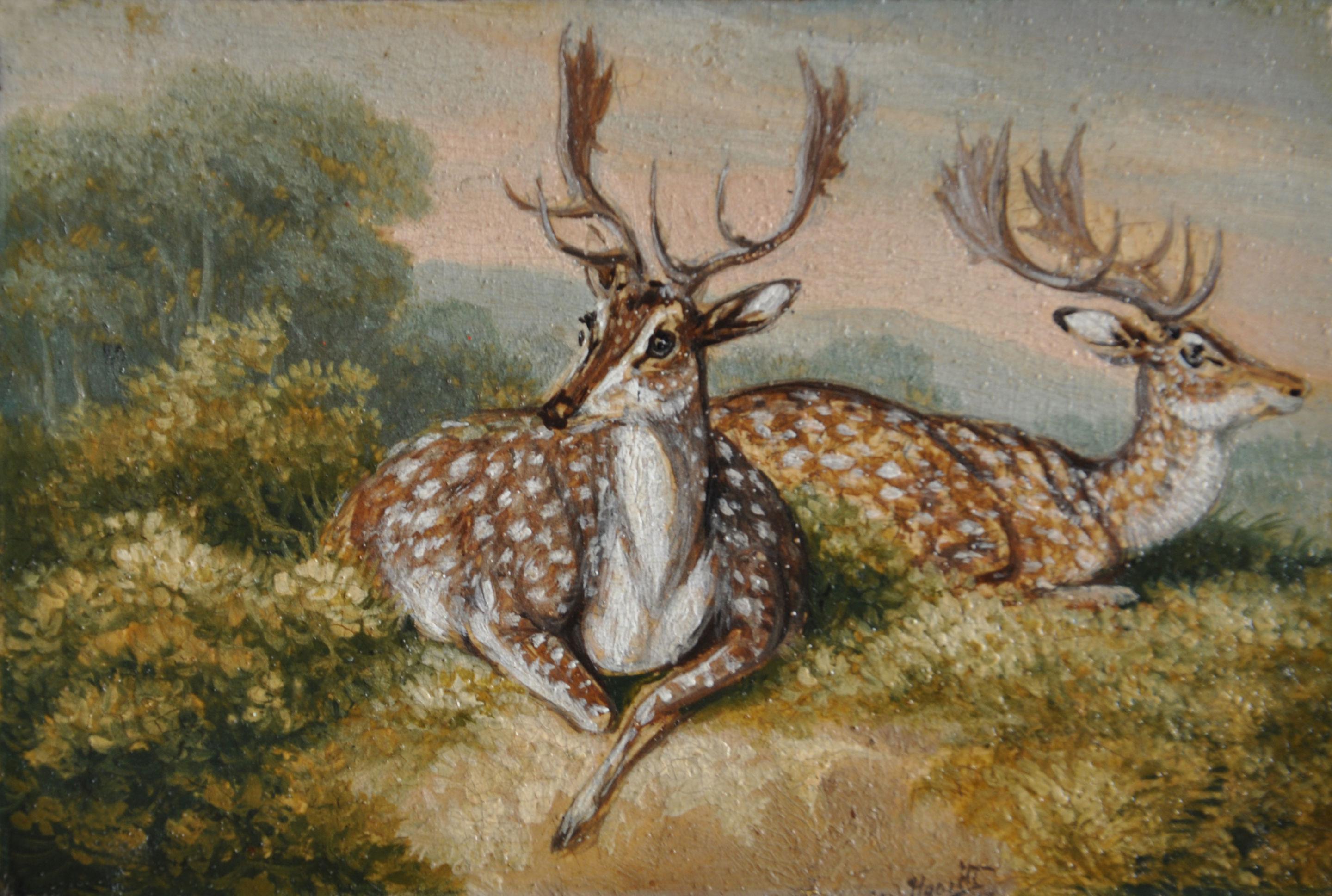 Oil on card laid on panel, signed, a pair

Samuel Howitt was born in 1756, probably at Staining, the fifth of six children. They were an old Nottinghamshire family who were squires at Chigwell in Essex and financially well off for several generations. His family were Quakers and he was reputed to have an adventurous spirit and light-hearted character and enthusiastically took part in many sporting activities and entertained well, basically living on the inherited family fortune.

He sketched mainly for pleasure and, although he moved in artistic circles, he had no formal training even though some of his friends were eminent artists, including George Morland, John Raphael Smith and Thomas Rowlandson. The last was his brother-in-law for he married Elizabeth Rowlandson in 1779 and they lived at Chigwell for some time. J C Wood writes of this friendship that "…he (Howitt) set up as drawing-master in London where he became a court card in Rowlandson's pack."

Eventually he ran out of money and had to move to London to find a job. He obtained the position of drawing master at Dr Goodenoughs Academy in Ealing through the help of his friend the renowned riding master, Henry Angelo. This association did not work out very well as Samuel Howitt frequently failed to appear to meet his commitments at the Academy and his employment ceased. He seems to have been unreliable also in his domestic affairs and his marriage to Elizabeth did not last long as his passion for fishing excursions proved too much for her to tolerate. However, it appears that their parting was comparatively amicable as he left her well provided for in his will when he eventually died in 1822 at Somerstown in London.

Like his friends Morland and Rowlandson, who were heavy drinkers and gamblers, he also had a tremendous artistic output despite his lifestyle. He is primarily known as a watercolourist and print maker but also worked in oils. He was an excellent etcher and his large number of sporting prints, many of which were in large sets, included the famous Ormes Collection

Howitt began exhibiting at the Incorporated Society of Artists in 1783 before graduating to the Society of Artists where he showed three works and the Royal Academy where he exhibited ten times up until 1815. He took inspiration for his depiction of animals by studying them at the Tower of London Menagerie enabling him to produce exotic subjects such as Lion and Leopard now in the Birmingham Museum and Art Gallery and Battle between a Tiger and a Buffalo. He was a predecessor of Henry Alken in the painting of sporting scenes and animals

Howitt also illustrated books, including The British Sportsman, 1799/1800 which contained 72 plates, Beckfords Thoughts on Hunting and a total of 157 plates for The Old Sporting Magazine. He supplied twenty engravings for Orme's Collection of British Field Sports of 1807 which mainly comprised plates of shooting or hunting scenes. He illustrated The Anglers' Manual in 1808 and produced 56 plates for A New Work of Animals in 1811, the designs of which were inspired by Aesop's Fables. In 1812, seventy of his illustrations appeared in The British Sportsman and in 1817 he also illustrated Oriental Field Sports with scenes from Bengal depicting scenes of tiger shoots and pig sticking. There is no actual evidence that he ever went to India but they were based on sketches made in India by Captain Thomas Williamson,

His oil paintings are comparatively rare and his landscapes were well painted, often having large fern-like leaves in the foreground. In his equestrian pictures the figures and horses are readily identifiable as they always have a look typical of him. When he depicts hounds they nearly always have a similar stance and some exhibited paintings depicting deer include "Stag hunting" and "Jacques and the deer."

Although primarily a sporting artist, he also produced other works which were exhibited at the RA and SA with titles such as: "Fairlop Oak on Hainault Forest, Essex", "The Tollgate at Kennington", "Smugglers Alarmed", "Dead Game" and "Views of the Ruins of an Abbey at Ayesby". The Paul Mellon Collection (now the Yale Center for British Art) has examples of his work and other institutions that have works by him include: British Museum, Victoria and Albert Museum, Tate Britain, Birmingham Museum and Art Gallery, Fitzwilliam, National Trust - Anglesey Abbey, Felbrigg, Ightham Mote, Gunby Hall Estate, Croft Castle, Hanbury Hall, Lyme), Museum of Island History (Isle of Wight), Wellcome Collection, Museum of London, The Morgan Library and Museum (New York), Yale Center for British Art, Philadelphia Museum of Art, Virginia Museum of Fine Art and Museum of New Zealand

Oil on card laid on panel,