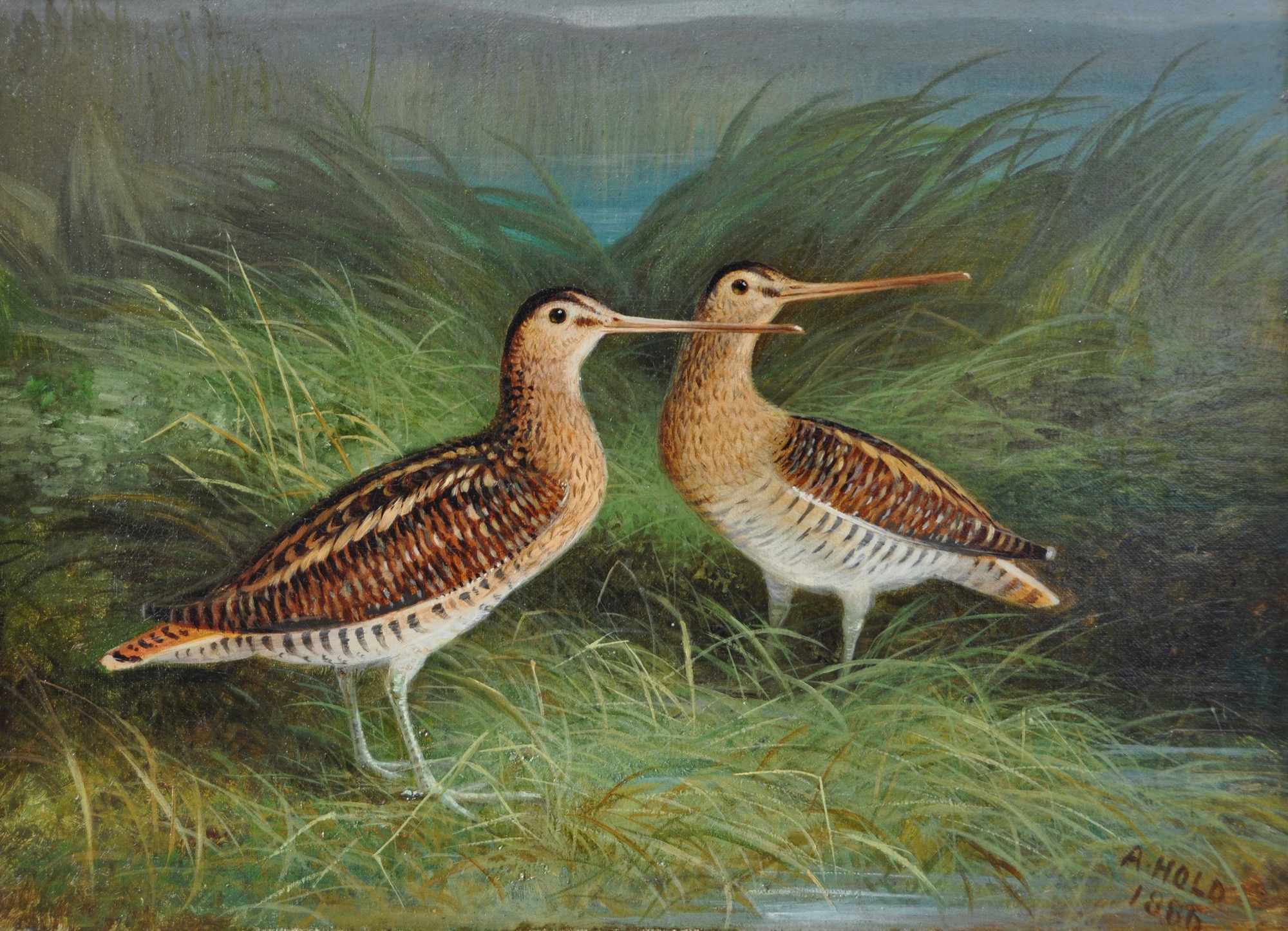 This skilful painter, principally of birds, was born in Alverthorpe in Yorkshire in 1815 to Thomas and Mary Hold who were Quakers. Abel was one of nine children, six of whom were boys and two of his younger brothers, Tom and Ben, also became artists painting similar subjects to him but in not such a tightly observed style.

He was apprenticed as a house painter in Wakefield but seems to have been a self-taught artist. He undertook commissions to paint backdrops and scenery for theatrical productions as well as for travelling showmen and this developed into establishing a reputation locally, especially for his gun-room style paintings which were popular with the local gentry.

In 1841 he married Sarah Miller and they too had nine children. In about 1852 they moved from Barnsley to the nearby village of Cawthorne and Hold established himself as a artist. He became friends with the vicar, Charles Spencer-Stanhope, who was a member of the local landed gentry family and he in turn introduced him to the head of the family, Walter Spencer- Stanhope who was the owner of Cannon Hall. Walter was impressed with Hold's marked ability and became his patron commissioning him to paint sporting pursuits on the estate as well as portraits of several family members and estate workers such as Jonas Beaumont (1783-1857) who was the Estate Carpenter and Elknah Clegg (1803-1872) who was the Woodman.

Charles Spencer-Stanhope, was a long-time patron of John Frederick Herring Snr and it is apparent that Herring was familiar with Hold's work, referring to him in a letter dated 15th March 1850: "I am glad to hear your Barnsley man gets on so well…I should expect to see something better this season." Another member of this family, John Roddam Spencer-Stanhope, (1829-1908) was an eminent pre-Raphaelite painter who was close to E C Burne-Jones and G F Watts.

Hold exhibited in the London venues between 1849 and 1871 with sixteen at the Royal Academy, one at the British Institute and one at the Royal Society of British Artists in Suffolk Street. He also showed his work at exhibitions in Manchester, Liverpool, Birmingham and Wakefield. Titles include "Black grouse, woodcock and snipe", "High-bred pheasants, woodcock and hare", "Partridge Shooting over Pointers", "Wild ducks from nature", "Study of game and dogs", "Rustic children with firewood", "Nest of a Bunting" and "The Lincoln to Wakefield Stagecoach". Although the majority of the exhibited works show his birds to be depicted as still life, many other examples encountered are of pairs or groups of birds, often game, in landscape settings.

Abel Hold died on 8th May 1896 and was buried in Cawthorne churchyard where a memorial to him was erected to mark the centenary of his death in 1996 through the instigation of the local community.

Examples of Abel Hold's work can be seen in the collections of: Kirklees Museum, The Hepworth in Wakefield, Cannon Hall Museum, Cooper Gallery in Barnsley, Wigan Arts, Bowes Museum at Barnard Castle and the Cawthorne Victoria Jubilee Museum