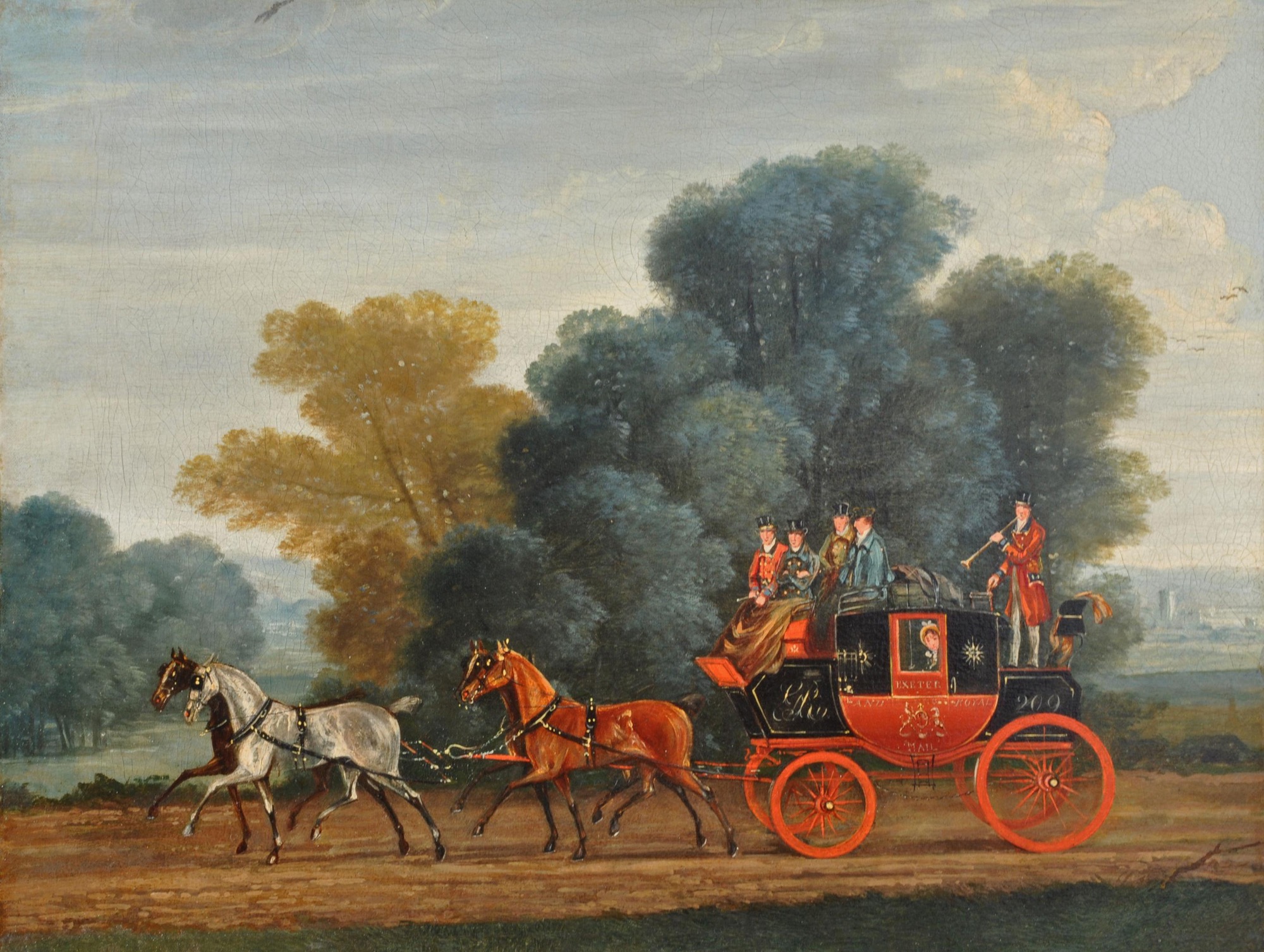 Oil on canvas laid down

The Royal Mail coach or Post coach depicted here is an example of a service that had started in Britain in 1784 and was faster than the stage coach as passengers were of lesser importance than the mail and stops were made only at mail reception points. The coach was drawn by four horses with the mail contained in a box at the rear of the vehicle and guarded by a Royal Mail officer who stood beside it. There was room for four passengers inside but after a while extra passengers could travel on top with the driver.

This horse-drawn mode of delivery replaced the earlier delivery service, initiated in 1635, where a mounted carrier had ridden between posts and been received by a postmaster who would separate the letters for his area before handing the edited bundle plus his additions to the next rider who would continue on. It was expensive and not a particularly efficient service, especially as the riders were often preyed upon by highwaymen.

It was the Bath theatre owner John Palmer, who had run a coach service to deliver his actors and props between venues, who had the vision to see that coaches would greatly improve the postal service. He proposed his idea to the London Post Office in 1782 and despite opposition from various officials, William Pitt, who was Chancellor of the Exchequer at that time, agreed that he could trial a run between London and Bristol. This experiment went ahead on 2nd August 1784 and was a success as it cut the delivery time of thirty-eight hours by twenty-two hours and as a consequence, Pitt authorised that route and the expansion of the service. By the end of 1785 there were regular mail runs from London to Exeter, Poole, Portsmouth, Dover, Norwich, Worcester, Gloucester, Holyhead, Liverpool, Carlisle and Leeds. John Palmer was rewarded for his initiative by being created Surveyor and Comptroller General of the Post Office.

The early teams, drivers and coaches were supplied at first by contractors and the latter were poorly constructed but there was stiff competition to win these lucrative contracts. However, by the turn of the century, the Post Office had its own staff and teams and they were all painted in the official livery of scarlet and black. The first coaches were designed to carry four passengers with only the driver outside at the front with the mail guard at the back. This guard was deemed very important and was well paid to protect their charge. They were dressed in scarlet and gold and armed with pistols and a blunderbuss and carried a timepiece to ensure punctuality. Unlike the drivers who changed over at certain points when the horse teams were changed, the guard remained with the coach for the duration of the journey and had to ensure the delivery of the post whatever circumstance or problem arose. There were stories of guards dying from exposure during winter.

It soon became evident that profits could be increased by adding passengers to these coaches and initially an additional passenger was allowed to sit outside beside the driver but then an extra row of seating was installed behind this position which allowed two further passengers to sit outside. The mail coaches set a limit on the number of passengers and the amount of luggage that could be taken. This was because many of the privately run stage coaches would be overloaded and top heavy causing them to overturn. A prospective traveller would have to decide whether the cleaner, faster and safer but more expensive mail service was preferable to the less well-regulated alternative. For many of the populace at that time, even undertaking a Mail coach journey on top with the prospect of arriving at one destination cold, wet and muddy would have been prohibitively expensive.

Progress was slow on the poorly maintained roads averaging about 8 mph in the summer and 5 mph in the winter. Travelling on the coach was uncomfortable and when the coach came to a steep incline, all the passengers would have to disembark so that the horses could make it to the top without excessive strain. Every 10 to 15 miles the horse team was changed.

Many of the West Country Mail coaches left from the Gloucester Coffee House in Piccadilly at night when the roads were less crowded allowing faster travel. The essayist William Hazlitt wrote: "The finest sight in the metropolis, is the setting off of the mail-coaches from Piccadilly. The horses paw the ground and are impatient to be gone, as if conscious of the precious burden they convey. There is a peculiar secrecy and dispatch, significant and full of meaning, in all the proceedings concerning them. Even the outside passengers have an erect and supercilious air, as if proof against the accidents of the journey; in fact, it seems indifferent whether they are to encounter the summer's heat or the winter's cold, since they are borne through the air on a winged chariot. The mail-carts drive up and the transfer of packages is made, and at a given signal off they start, bearing the irrevocable scrolls that give wings to thought, and that bind or sever hearts forever. How we hate the Putney and Brentford stages that draw up when they are gone! Some persons think the sublimest object in nature is a ship launched on the bosom of the ocean; but give me for my private satisfaction the mail-coaches that pour down Piccadilly of an evening, tear up the pavement, and devour the way before them to the Land's End."

It was not only the introduction of a faster and more reliable postal service which had such a significant effect on British society. Up until the 1780s, there was no standard time in the UK with each region or town operating on a local time. The need to ensure a reliable delivery schedule with an accurate timetable necessitated having a system of recording the time that was ubiquitous and this gradually evolved so that by the time of the advent of a rail transport system in the 1830s and the resultant increase in journeys and reduced travel time, GMT was introduced on 11th December 1847. It was trains which brought the age of coach travel to an end with the first rail mail delivery being undertaken in November 1830 between London and Manchester and by the 1840s and 50s, the service was phased out.

Oil on canvas laid down