A Still Life of Dead Game 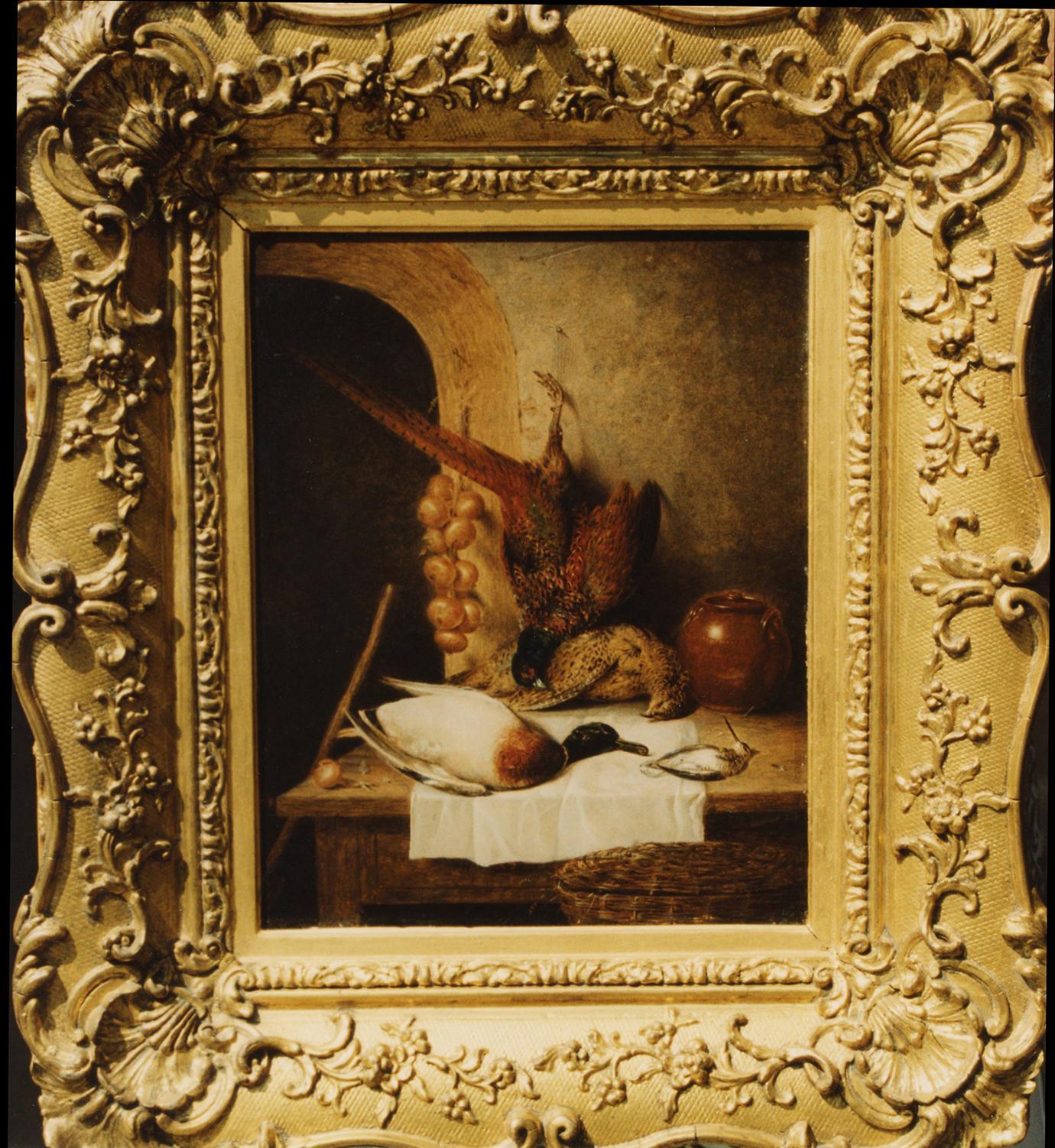 A Still Life of Dead Game

George Stevens was a competent and prolific painter of birds, animals, game, fruit and occasional portraits and mostly in oil paint, some of which were large, but he also produced drawings and was involved with the early stages of photography. Grant writes of him that "…his works being numerous and valued by connoisseurs of those subjects".

Stevens exhibited two hundred and forty-six paintings at the Royal Society of British Artists, where he was elected a member in 1825, Treasurer in 1828, and ultimately President in 1833. Stevens exhibited a further twenty-one paintings at the Royal Academy and seventy-five at the British Institute and his first exhibited painting, Dead Hare, was in 1810 at the R.A. Over the course of his career, these exhibits were sent from a variety of London addresses, among which was at first, 2 Northumberland Street and later others at Camden Terrace, Manor Place South in Chelsea, Abbey Road in St John's Wood and Albert St in Regent's Park.

Apart from these addresses which accompanied his admissions to the major London exhibitions and the paintings that survive him, little is known about his personal life or where he undertook his artistic training. His less well known portraits and genre scenes cover European locations and depict Italian, French, Spanish, Greek and Dutch subjects so he almost certainly travelled to those countries, making sketches and notes as he went. However there is one journey which was notably unusual for the mid-19th century: the National Library of Australia holds records of Stevens arriving in Sydney in 1849 and he had with him a collection of his paintings and engravings which he exhibited at the Royal Hotel from 20th August in that year.

The collection was mostly comprised of still-lifes of fruit or game and genre paintings such as Italian Boy with hurdy-gurdy which was priced at 45 guineas and the most expensive was The Fruit and Game Stall which was on offer at 150 guineas. The latter was apparently the remaining one from a pair that had been exhibited previously at the Manchester Institution but ended up being separated to be sold individually. It seems that the majority of the oil paintings had been previously exhibited at the RBA in London except for several landscapes of the English countryside for which Stevens was not known for producing at home so presumably were done specifically to appeal to the expats resident in the colony.

The paintings were well received in the press and the art critic of the Sydney Morning Herald was particularly enamoured with the genre paintings writing of Stevens that he was: "…even more successful in his delineations of the human form…" than in still-life and described The Pet Dog - Affection (which was a half-length, life-size portrait of a woman petting a spaniel) as "…a very sweet picture", and writing of The Beggar's Petition - Pity the Sorrows of a Poor Old Man : "If this painting were dirtied and cracked, and declared to be the work of an eminent artist of the sixteenth or seventeenth centuries, it would be valued at an immense sum".

Despite the positive press reception however, the exhibition did not prove to be financially remunerative and it seems that he only sold about eight oil paintings from the original group of thirty-five so Stevens had to consider other methods of realising some return on his journey and investment. On 4th September 1849 he announced that about two hundred works, the majority of which were engravings, would be put up in a lottery with six hundred tickets on offer at two guineas each. Even this did not reach the level required so in October the price per ticket came down to one guinea. It would appear that George Stevens's paintings were not to the Australian taste and on 14th March 1851, an announcement was made by the auctioneer George Lloyd that he would be disposing of all the artist's effects from his house at 235 Elizabeth St as the latter had booked a return journey to England aboard the Tamar. The likelihood that Stevens had intended to establish himself as an artist in Australia with the intention of remaining there with his family can be deduced from what was for sale. The furniture was described as "…very superior, principally English made, comprising the usual requisites for a family of respectability". Other items in the auction included engravings after the old Masters and renowned English artists such as Landseer and a magic lantern with slides plus other projecting apparatus.

George Stevens has often been associated with the very early days of photography, whether as a distinct pursuit or as an adjunct to his paintings, utilised as a recording of a particular scene to be used later in producing a painting. The notable English history artist Marshall Claxton, who was in Australia at that time and who travelled also in Egypt and India, was known to use cameras to record scenes for later use. "A Photogenic Apparatus, for taking likenesses either in Daguerreotype on metal, or in Calotype on paper" was another significant inclusion in the auction and would have been one of the earliest known examples of calotypes in Australia and it is probable that Stevens brought the camera with him from England.

By 1852, George Stevens was back in England at an address in Regent's Park and was sending still-life exhibits to the R.B.A. There are no known paintings of his Australian sojourn and he seems to have simply reverted to his life prior to the adventure. Although he is best known as a still-life painter and these feature markedly in his exhibited works, other
subjects include: The Larder; Rural Sports; Dead Hare; A deer Hunt; Snipes and Water Rail; Heron and Bittern contending over fish; The Hawk with its prey; Black Grouse and Ptarmigan; Portrait of a Horse, property of a gentleman; Scotch Terrier; Portrait of a Spanish Wolf-Dog, the property of J Bennet, Esq., M.P.; Fruit girl of Versailles, Pyrenees; Boy blowing bubbles; Old Bond Street and Strawberries.