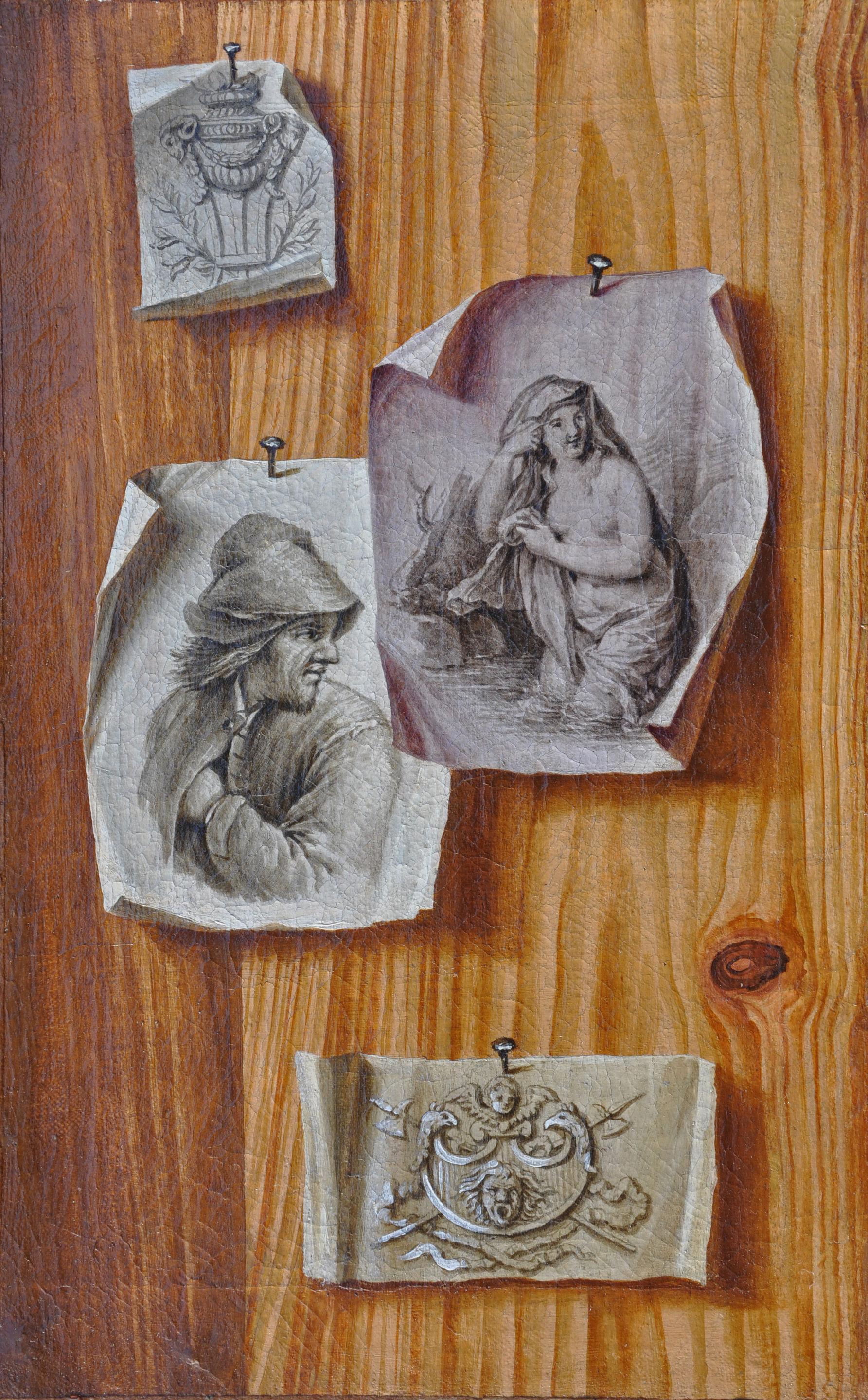 Gabriel Grésely was a self- taught artist who came to Paris to improve his artistic technique. He was born on 8th January 1712 in L`Isle-sur-le-Doubs, near Montbéliard in the Bourgogne-Franche-Comte region of eastern France just a few kilometres from the Swiss border and came from a family of well-known glass makers.

He specialised in trompe l'oeil paintings, especially with prints, (often after the draftsman and printmaker Gabriel Perelle), pinned to plain wooden paneling or boards. Sometimes these prints and drawings are held in place by ribbon attached tightly across the wood and in other works playing cards, letters and notes, quill pens, sticks of sealing wax and scissors are arranged around the composition. Other artists who produced similar subject matter was the earlier Flemish painter Cornelis Norbertus Gysbrechts (c.1610-c.1675) and the French artist Wallerand Vaillant (1623-1677). Gresely also painted portraits with the sitter looking out from behind a broken pane of glass but examples of these are rare. Another artist of the time who painted trompe l`oeils like this was the eminent portraitist Louis Léopold Boilly (1761-1845) whose "Self Portrait with Broken Glass" can be seen in the Musée-Hôtel Sandelin, Saint-Omer.

Upon his arrival in Paris Grésely was shocked to discover that one of his paintings had preceded him to the city and was being sold as the work of a renowned master. Exposing the fraud gained him considerable notoriety, establishing his reputation and consequently he was inundated with commissions. One of his clients was Comte de Caylus who purchased a number of his works.

He was forced to leave Paris because of poor health and he moved to Besançon in his native province. He continued to work there producing the trompe l'oeils for which he was renowned but also portraits, genre subjects and still life until his death in 1756.

Museums where his work can be seen include The Cooper Gallery, Dijon and Besançon, holding works such as: "Young girl with a basket of grapes", "Swiss drinker", "Trompe l`oeil", "Two young girls training a dog" and "A young boy and a young girl giving cherries to a bird"

Trompe l`oeil paintings tell us as much about their creator`s virtuosity as about the taste of the period and were often tributes to the artist`s own talent and to that of others, becoming a kind of punning with images. There was quite an artistic challenge in reproducing the graphic quality of prints and drawings using a brush and colour. The message this made clear was that through the artist's ability displayed, it confirmed the superiority of painting over drawing and printing and the artist was at liberty to create whatever arrangement of the elements of his painting that he chose. In depicting the paper and by showing it folded, creased, torn or piled up, he could give the impression of depth, creating a three-dimensional illusion in a two dimensional format. The painter could utilise drawings or prints of his own or those of other highly regarded artists and references could have allegorical or humorous meaning. In one of Wallerand Vaillant's works, "Four sides" there is an assemblage of pamphlets and prints of varying subdued coloured hues that appear pinned at overlapping random on a flat wooden surface but if one regards the work closely, it can be seen that in fact it is a very carefully considered construction. One of Grésely's oft-repeated props was a torn print of a surgeon with a patient and in one instance it is attached by sealing wax to a piece of wood and is being put to use to keep a quill pen and a note in place which have been tucked in behind it.