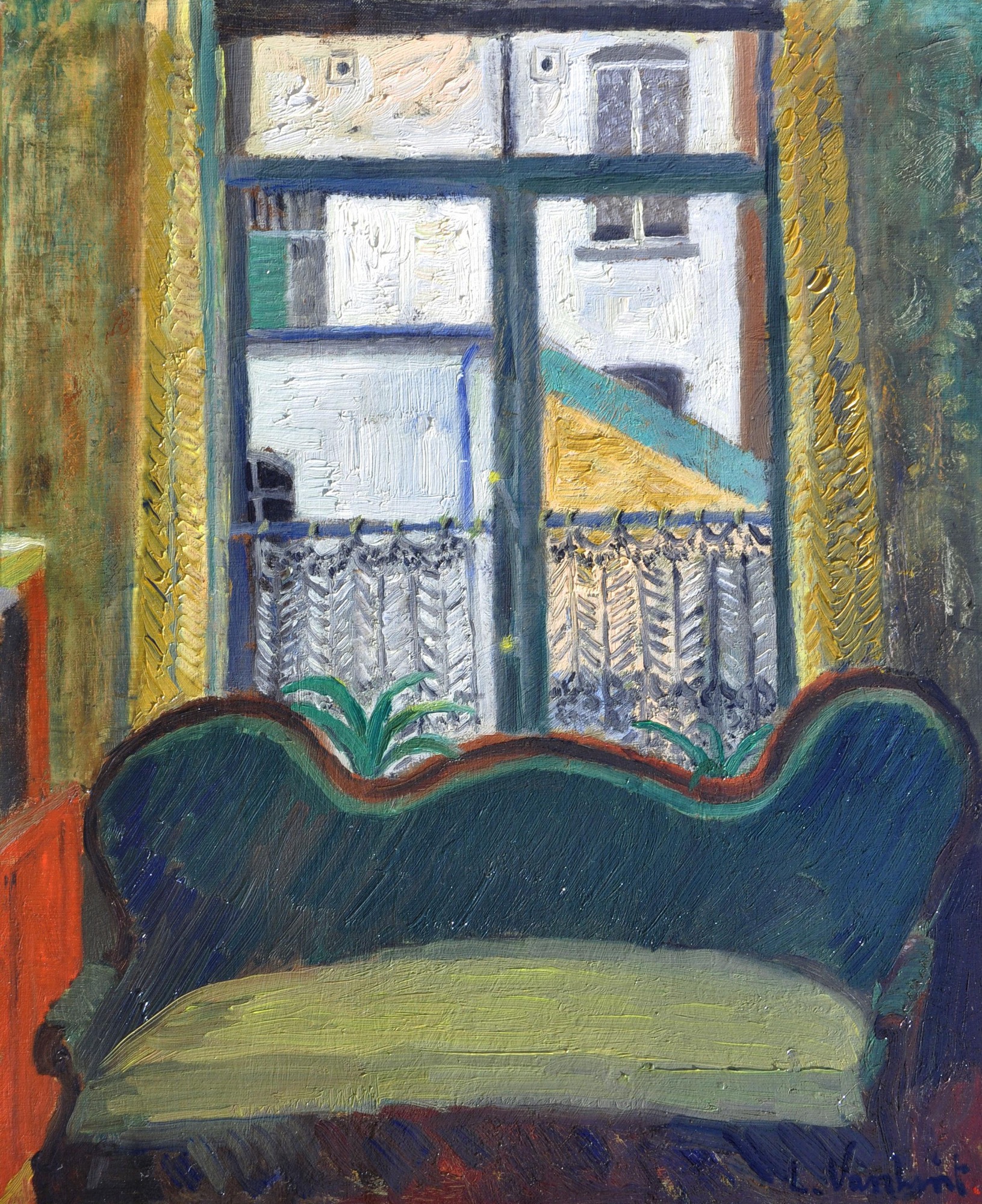 Louis van Lint was a most interesting artist who experimented with various artistic forms but who evolved into one of the most important Belgian Abstract painters. Early in his formative years he also took an interest in sculpture and architecture and, during his later career, was also a muralist as well as designing costumes and backdrops for the theatre and opera, most notably for Stravinsky's "L'Histoire du Soldat". He also introduced the creator of Tintin, Georges Prosper Remi - better known as Hergé - to abstract painting and gave instruction to the cartoonist in 1962

He was born in the Brussels municipality of Saint-Josse-ten-Node on 25th December 1909 and undertook his artistic training between 1924 and 1938 at L'Académie in the same town under the instruction of the landscape, marine, genre painter and portraitist Henri Ottevaere.and the painter and designer Jacques Maes.

In 1939, together with Gaston Bertrand and Anne Bonnet, he founded the artistic group La Route Libre. His work at this time, during the War years, was divided between a series of Intérieurs, with a notable light and shade effect and some studies imbued with a psychological intent reflecting the influence of the Animist Movement. He had immersed himself in "the phantasmagorical and carnival-like universe" and sought to render his artistic impression of this belief system. It was at this time that he had the task of organising the annual exhibitions of the Apport group which helped to support and give work to young Belgian artists.

In 1943 he was awarded Le Grand Prix de l'Art Populaire and it was in this year that he made the break from the more traditional style of painting, shockingly exemplified by his exhibiting "L'Écorche" (The Flayed Body), leaving behind his animist work.

In 1945 was the co-founder of the group La Jeune Peinture Belge taking part in a number of manifestations of this collective both in Belgium and abroad. His work with this collective showed how he had become influenced by the Belgian Expressionists and particularly by the French Neo-Cubists Edouard Pignon, Alfred Manessier and Maurice Estève who had a significant influence on the young Belgian painter. In 1946 and 47 Van Lint was painting with a joyous unrestrained freedom and produced a series of works based on "Fêtes Foraines", "Villes" and "Poulailleurs". In this last, (Hen Houses), he interpreted the light on the birds' plumage as an effect like rungs on a ladder. He was also experimenting with the "magic lantern" where the painter could observe and interpret the effects of pieces of coloured glass on moving objects.

Louis van Lint did not remain fixed in one style for long however and between 1948 and 1951 he collaborated with Cobra and Espace. Cobra was a radical modernist art movement with an ethos of spontaneity and experimentation and freedom of form and colour. They detested Surrealism and their works were influenced by Miro and Klee blended with an admiration for the purity of interpretation found in children's drawings. The founders signed a manifesto of intent but the artists were an amalgam of Danish, Dutch and Belgian painters. Van Lint's paintings became more Constructivist, progressing into abstraction with objects reduced into verticals and horizontals.

His progress through neo-Constructivism into a lyrical abstraction where landscapes and cloud studies are reduced to blobs of colour, where greens and reds dominate and where surfaces seem to have a dynamic movement creating a rhythmic whole, saw him become one of the most important abstract painters in Belgium in the latter half of the 1950s.

He was awarded a prize by the Solomon Guggenheim Foundation in 1958 and in 1960 he was elected a member of the Belgian Royal Academy. He exhibited extensively, not only in Belgium but also in New York, Carnegie Institute in Pittsburgh, Washington, Chicago, Sao Paolo, Buenos Aires, Seoul, Tokyo, Cincinnati, Mexico City, Paris, Venice and Madrid.

Examples of his paintings can be seen in: Musée d'Anvers, Musée de Bruxelles, the Guggenheim and Brooklyn Museum in New York, Sao Paolo Museum of Contemporary Art and the Carnegie Museum of Art.