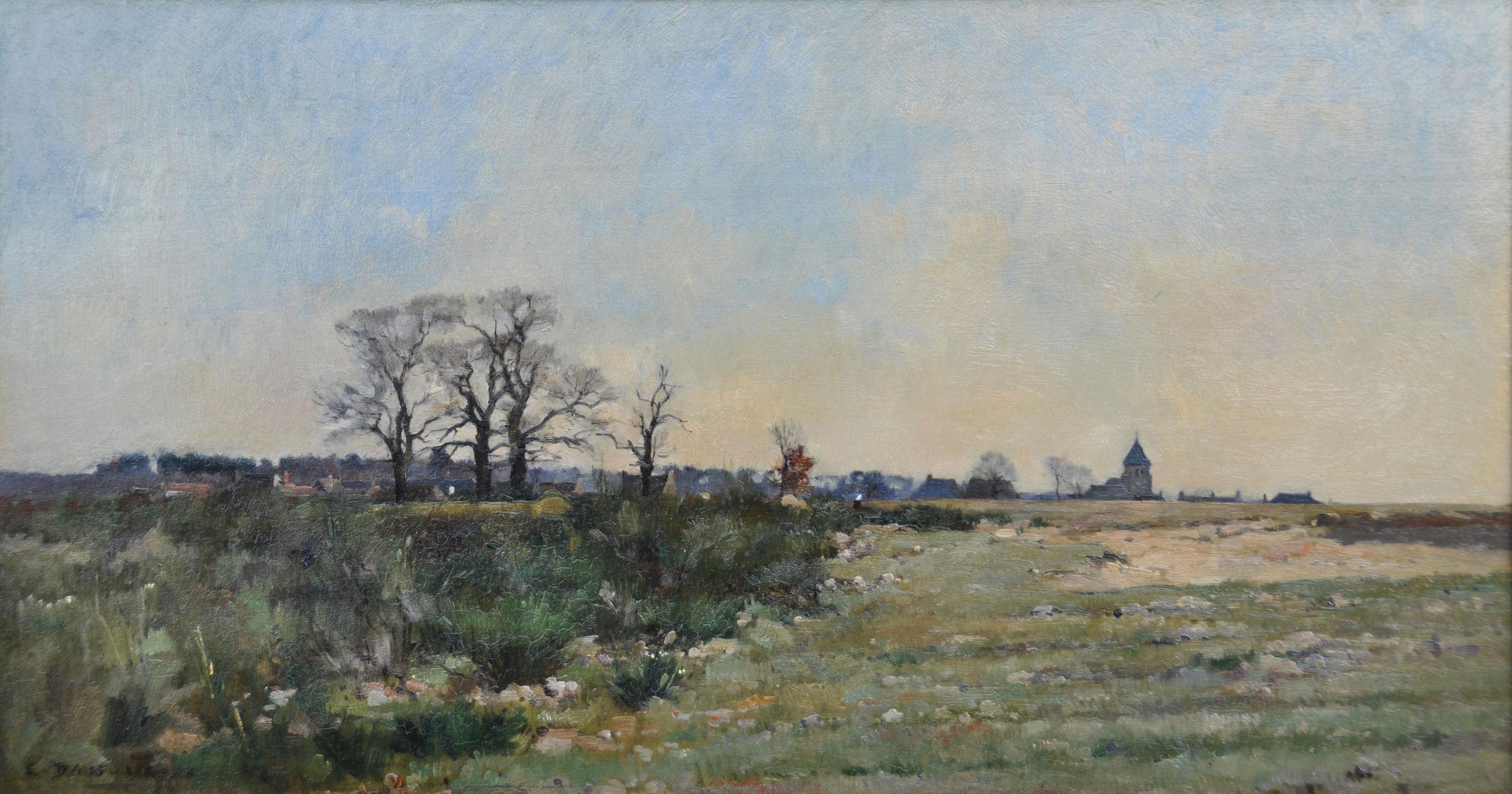 Pierre Emmanuel Damoye was born on 20th February 1847 in Paris and started his artistic instruction at L'École des Beaux Arts in that city, principally in the atelier of the notable history, portrait and landscape painter Léon Joseph Florentin Bonnat but also studying under Jean Baptiste Camille Corot and Charles François Daubigny.

Landscape painting was his passion right from the beginning however and his reverence for the Barbizon School and in particular, two of its great masters Corot and Daubigny, was clearly apparent in the earliest dated works which he produced towards the end of the 1860s. The influence of these two can be observed in the more impressionistic application of paint and the brighter palette than was typical of many other contemporaneous French landscape artists. However, his choice of subject matter and the way that he observed the landscape became his own early on in his career. He was particularly adept at portraying the heat of summer with plains dotted with farm buildings and trees, often with low horizons, all under an expanse of sweeping skies. He favoured the fens, rivers and water meadows with the attendant undergrowth of the Fontainebleau environs and managed to imbue classical compositions with the vibrant reality of nature as well as his own emotional connection to it.

Damoye also became drawn to the landscape to the north of Paris, portraying the Oise and Seine riverbanks and surrounding plateaus as well as the Picardy region, Loire valley with occasional forays to the coast of Normandy. He was one of the principal painters who became associated with the School of Pontoise. This was an unofficial group of young artists of the Barbizon and subsequent Impressionist and Post-Impressionist schools who found the crescent-shaped area north-west of Paris, which included the towns of Pontoise, Bougival, Argenteuil, Auvers-sur-Oise and others, an inspirational place to live and work. Daubigny and Corot had resided and painted there and later Pissarro, Cézanne, Guillaumin and Gaugin were just some of the hugely significant artists who based themselves there for a time gaining it the epithet of the "Cradle of Impressionism".

He exhibited at Le Salon in Paris for the first time in 1875, showing a work entitled "L'Hiver" and appreciation for his ability and popularity was rewarded with a Bronze Medal in 1879. This was followed by the Silver in 1884 and the Gold for his exhibits at L'Exposition Universelle in 1889. In 1893 he was accorded membership of the Légion d'Honneur and was included in the Salon vetting committee in 1900. All this official recognition of his talents would have given the observer the perception that he had become part of the art establishment but this would have been erroneous for he joined, as one of the founding members, La Société Nationale des Beaux-Arts, a rival exhibiting group which was revitalised in 1890 as opposition to the rigid classical French art world. It espoused non-conformity and had included previous exhibitors such as Daubigny, Gustave Doré, Léon Bonnet, Daubigny and Meissonier and came to be regarded one as the earliest manifestations of Secessionism. He also showed at Le Salon de Champ-de-Mars until the end of his life.

Damoye died in Paris on 22nd January 1916 and was buried in the Pere Lachaise cemetery where he lies near to Corot, Delacroix, Seurat, Jacques-Louis David, Moliere and Chopin.