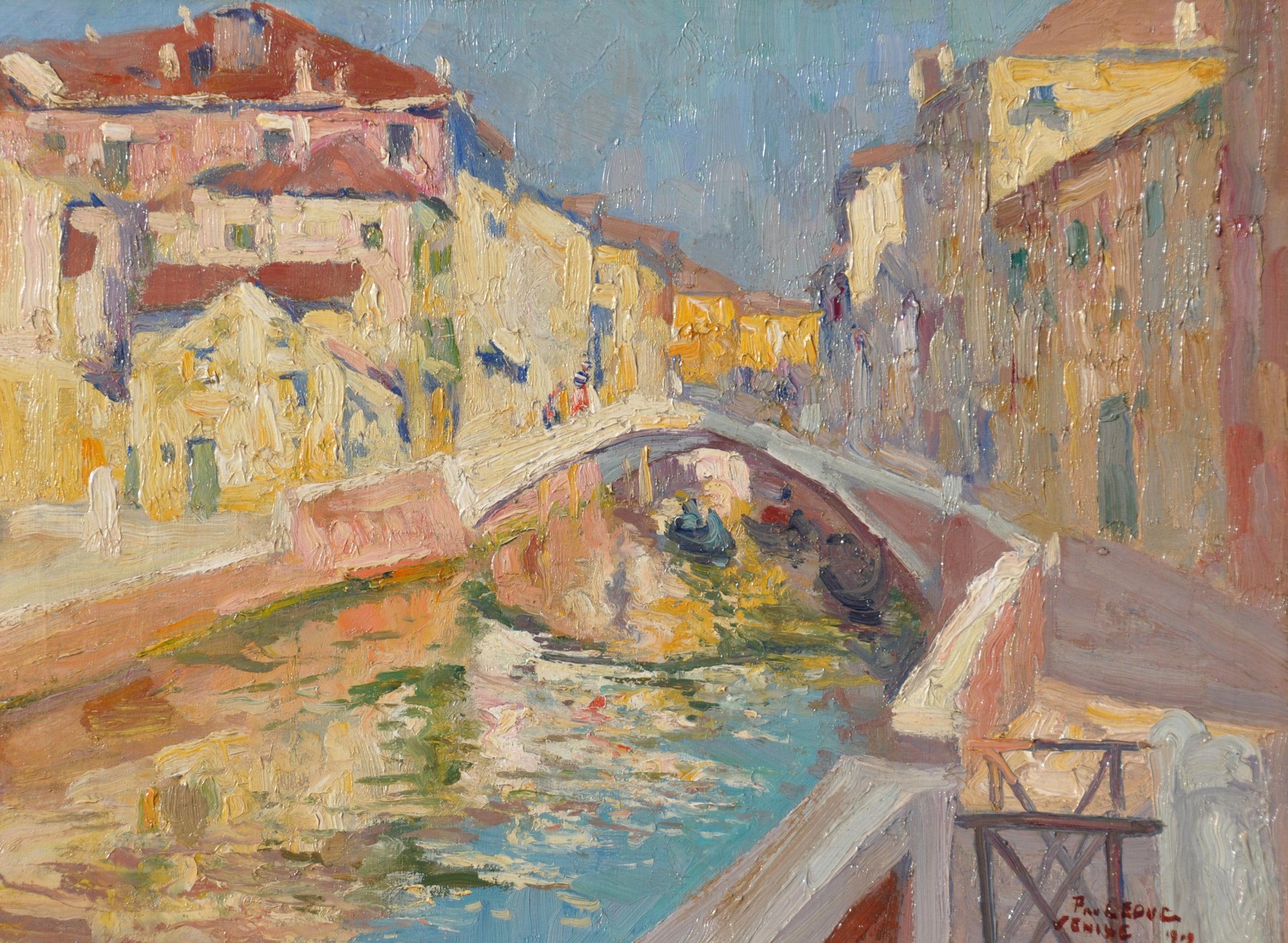 Born on 28th August 1876 in La Louvière, the industrial area of Hainaut province, Leduc was a pupil of the genre and landscape artist Antoine Boulard at the Mons Academy between 1891 and 1896 and later at L`Académie d`Anvers under the tutelage of the renowned landscape painter Albert Baertsoen. It was the latter who taught him composition and the technique of applying paint in thick layers.

He had first begun painting in the company of students of Joseph Théodore Coosemans in Tervuerenhole and had a predilection for landscapes and town views, particularly particularly favouring the depiction of his local region of Hainaut and the Brabantine area.

He was a large hearty man with a reputation as a straight talker and bon-viveur. He set up his studio on the ground floor of his lovely traditional Flemish house in Rue Léopold Courouble in the borough of Schaerbeek, Brussels. Although he had loved painting the local urban areas and landscapes, including Bruges, Dordrecht and parts of Holland, he felt the need for a change from the muted, misty north European light and travelled to the Italian Adriatic and Mediterranean south of France on a two year painting odyssey.

This transformed his style: he painted fast using vibrant colours applied often with a palette knife. His style and palette can be seen to derive from the Impressionist school, not only with the quite flamboyant colouration, but also the way the composition is divided into sections with the thick application of paint and the use of vertical lines. Luminist is also a term that can be employed to describe him and the influence of the

Fauvists can be perceived in the treatment of water in particular. The art critic Richard Dupierreux wrote of him in 1936 that "He uses an abundant, heavy palette and…his paintings are made up of tiny touches which, as fragmented light, come together again in the eye of the beholder. Faithful to a traditional technique and without abandoning the style of our homeland, he has made that of the French Impressionists his own at the same time. This makes him an Impressionist through and through…"

Leduc`s oeuvre included landscapes, urban and street scenes, rivers, canals, bridges and still-life. Much of his best work was of Venice and the Provençal and Midi regions of France with views of Avignon and around Marseilles. Even during his own lifetime he was hailed as one of Belgium`s leading painters and the art critic Arthur de Rudder said of him "…he was to sing the praises of the sun".

Museums where his work can be seen include: Charleroi, Schaerbeek, Ixelles, Mons, Frankfurt, Bucharest, Buenos Aires, Rio de Janeiro, and Brussels as well as the provincial museums of Hainaut and Brabant. His work was shown at the Venice International Art Exhibition and some of his paintings are in the Brussels Royal Palace and were in the collection of Count Prato in Milan and, prior to the revolution, the King of Romania.