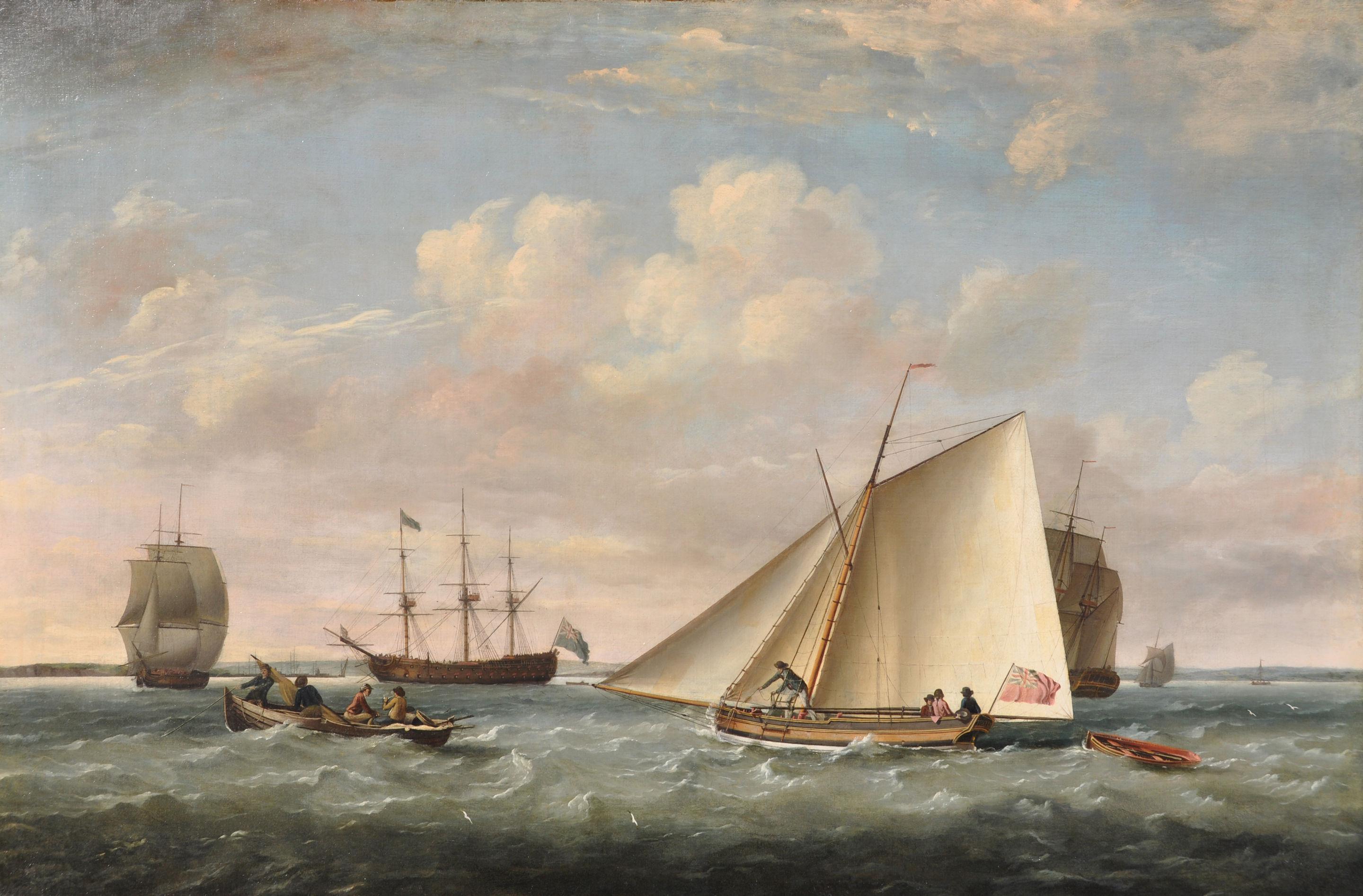 E H H Archibald, former Curator of Oil Paintings at the National Maritime Museum, writing in his Dictionary of Sea Painters, says of Francis Holman that he is "…one of the major marine painters of the 18th century". It is readily apparent from his works that he was a gifted artist and one who was particularly adept at portraying the water's surface and the light, feathery application of paint imparts the liquid transparency of the water combined with its continual movement.

One particularly surprising fact concerning Holman is that comparatively little is known about him and the background to his life and career. It has been suggested that the family were of Cornish origin but Holman was born in 1729, the eldest son in a family of six children, in Ramsgate on the Kent coast and baptised on 14th November that year at St Laurence-in-Thanet church in the same town. His father, also Francis, was a master mariner.

It is not recorded who gave him instruction in painting but his earliest known works are ship portraits which would have been commissioned by ships' captains and owners. Holman had a younger brother John who became a captain and continued in the family marine business. Because he and his family were so immersed in in the maritime world, he would not only know all the local characters who comprised that world, but also have built up a considerable knowledge of everything associated with shipping which is clearly discernible in the sensitivity and understanding of the ships and their relationship with the sea and the acuity in the portrayal of these vessels.

He first exhibited in the London venues in 1767 at the Free Society of Artists sending "A Sea Convoy in a Storm" from an address in Bell Dock, Wapping. He exhibited a further ten works there until 1772 and sixteen at the Royal Academy between 1774 and 1784. Exhibited titles include: "A Fleet coming from Sea to anchor at Spithead, with a Signal from the Admiral to moor", "The Augusta Yacht with his Majesty on board, reviewing his Fleet at Spithead", "The Engagement between Admiral Parker and the Dutch, from a sketch made on board a Frigate during the action", "East India shipping turning towards the Downs, with a view of Kingsgate in the Isle of Thanet" and "A Shipyard upon the Thames."

From 1768 he resided in several addresses in St George's, Shadwell including Broad Street, Johnson Street and Fawdon Fields off Gravel Lane which were in the docks region of east London. His one son who survived infancy who was born in 1757 with his wife Elizabeth but she must have died for he married Jane Maxted on 7th May 1781 although no children were recorded from this union.

Francis Holman was an industrious artist which connotes that he must have had a ready and keen market for his paintings. Apart from his ship portraits, he is probably best known for his views of Docks in Wapping and Blackwall, general shipping and sea actions. The latter became particularly popular during the American War of Independence with engagements between American ships and the Royal Navy as well as with the former's French allies, the National Maritime Museum's " The Moonlight Battle off Cape St Vincent, 16 January 1780" being a particularly fine example. Many of his paintings display the low horizon, between twenty and twenty-five percent of the picture, which is redolent of the important Netherlandish sea painters such as Willem van der Velde, Jan van der Cappelle and Simon de Vlieger, the former in particular being a significant influence of English marine painting.

Holman had one pupil, Thomas Luny 1759-1837, who became a famous marine artist in his own right. The pupil's early exhibited work was sent to the Society of Artists to be shown with the address "At Mr Holman's, Johnson Str, St George's" and his style at that time was very similar to his master's in layout and execution.

Francis Holman died on 29th November 1790 in Wapping and his brother John took his body to the family home at Ramsgate where his body was interred in the vault at St Laurence's. He was a classic English 18th century marine painter with a considerable understanding and knowledge of shipping which, combined with a dexterous ability to imbue his paintings with atmosphere, places him in the same bracket as such eminent painters of the time as Francis Swaine, Dominic Serres and William Anderson.