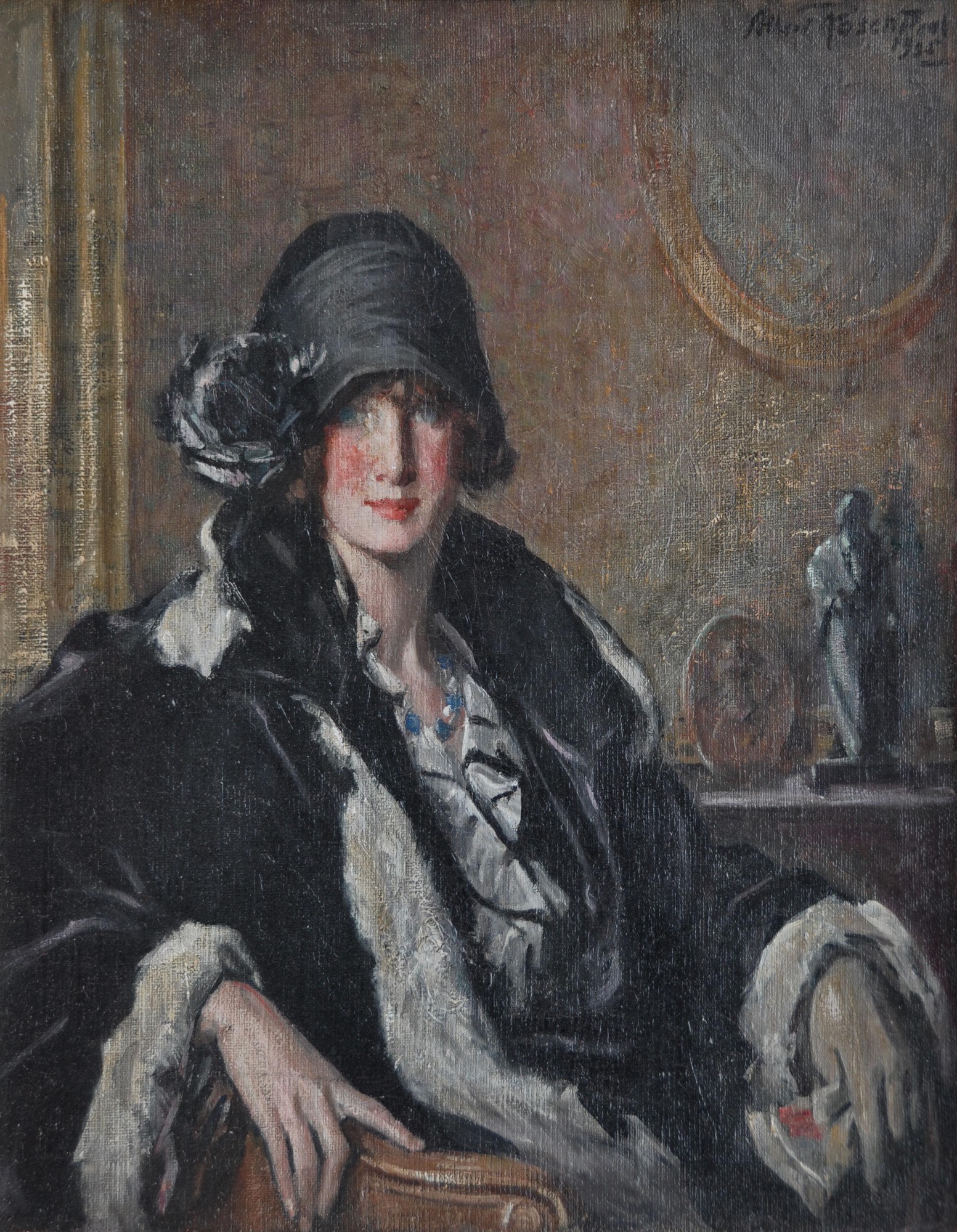 "My school days ended in my 16th year, and then commenced an interesting apprenticeship in my father's (Max Rosenthal) lithographic studio. The thrill was the nights spent in the newly opened classes of the Pennsylvania Academy of the Fine Arts with that talented, kindly, but then paralyzed Christian Shueselle as the teacher." This comes from the opening paragraph of Albert Rosenthal: Painter, Lithographer, Etcher written by the artist and printed in 1929, a signed copy of which he dated 7/18/29 and presented to the British Museum.

He had been born in Philadelphia on 30th January 1863 and the family home on Spruce Street also housed the studio of his Polish-born father who had established a successful career as a painter, draftsman, etcher and lithographer. Albert wrote of their home that it "… was the rendezvous of a group of gentlemen, the pioneers in the collecting of Autograph letters of Eminent Americans, who employed my father in the making of lithographic portraits, to go with the autograph material. One of the group was Charles R Hildeburn, a graduate druggist, whose interest in his profession ceased entirely upon getting his degree…It was his persistence, and insistence, that compelled my interest to etch portraits of the important men of Colonial and Revolutionary times in America. It was a daily association for some nineteen years."

It was as a consequence of Hildeburn's friendship and encouragement that the young Rosenthal embarked on this considerable undertaking and he started with the depiction of the members of the Federal Convention of 1787. He made the etchings from the original paintings and he was assisted in locating these in the collections of families and institutions by Dr Thomas Addis Emmet of New York. When the series was completed it was incorporated into a memorial volume of the History of the Constitutional Convention in 1887.

With the conclusion of these large undertakings, Albert Rosenthal felt a development in his artistic life was necessary and he wrote: "A desire was always in my mind to paint portraits and in 1890, I entered the Atelier Gérôme in l'École des Beaux-Arts, Paris with the idea that the etching period was done with." Jean-Léon Gérôme (1824-1904) was an important French painter and sculptor who was particularly influenced by the neo-Classical style and portrayed Oriental subjects as well as scenes from Greek mythology and history.

Aloysius O'Kelly, the Irish portrait, genre and landscape painter also studied under Gérôme, and we are given an insightful description of being part of this studio in N OSullivan's work Aloysius OKelly: Art, Nation, Empire published by Field Day Publications in 2010: "Places in Gérômes atelier were limited, keenly sought and highly competitive. Only the very best students were admitted and aspirants considered it an honour to be selected. Gérôme progressed his students through drawing from antique works, casts and followed by life study with live models generally selected on the basis of their physique, but occasionally for their expression in exercises known as the académie. The sequence was that they drew parts of a bust before the entire bust and then parts of the live model before preparing full figures. Only when they had mastered sketching were they permitted to work in oils. In his school, the floor sloped so that students could gain a view of the model from the rear of the room. They were also taught to draw clearly and correctly before consideration of tonal qualities. Students sat around any model in order of seniority, with the more senior students towards the rear so that they could draw the full figure, while the more junior members sat towards the front and concentrated on the bust or other part of the anatomy." Rosenthal furthered his studies at l'Académie Julian in Paris and also in Munich.

He returned to Philadelphia in 1893 having had this prestigious instruction in Paris but such was his reputation for etching that he had to postpone the idea of painting in oils as he was commissioned to etch several large plates of the Chief Justices of Pennsylvania. However, he did not have to wait long before utilising his proficiency in working with oil paints as he started to work on a venture to record early American portraiture when he was commissioned to copy original portraits of members of the Federal Convention. This led on to rendering the Aides-de-camp of George Washington and the officers of the War of Independence's French allies as well as the doctors, surgeons and artists who were involved in the Revolution as well as other dignitaries of the governance in Philadelphia.

He took these oil portraits and his prints sometimes from the original paintings by artists such as Robert Edge Pine, John Singleton Copley, Joshua Reynolds, Gilbert Stuart, John Trumbull, Thomas Sully, Charles Wilson Peale and John Ramage but at other times from life and occasionally from photographs or Daguerreotypes. Some of the Revolutionary subjects, as well as inspirational historical figures together with later important figures, were Lincoln, James Madison, Benjamin and William Franklin, King Louis Phillippe, Lafayette, Robert E Lee, William Penn, Oliver Cromwell and Theodore Roosevelt.

The etched plates were used in: Encyclopaedia of Musicians, The History of the Constitution of the United States 1889, History of the Supreme Court of the United States, 1891, Attorneys General of the United Stat1894, Pennsylvania, Colonial and Federal 1903, A History of all nations, 1905 and Magazine of the Historical Society of Pennsylvania. He also etched a view of the main aisle of St Patrick's Cathedral in New York and another view of the Nave in St Patrick's and the Organ Loft of Trinity Church, New York. A rather different venture was an etching made after Frederick Arthur Bridgman's iconic painting American Lawn Tennis Club which Rosenthal completed in 1891 and which was published by the Paris printmakers Salmom and Ardail in that year.

The later oil portraits were in the style popular with society portrait painters such as John Lavery, Francis Campbell Boileau Cadell and Giovanni Boldini and displayed fluid brushstrokes with the sitter, often a society wife, in fine clothes and elegant interiors. Some examples of these are Millinary in seal and sable, Woman holding a fan, Portrait of a woman in a hat and veil, The Milliner's Shop, My Studio and Mrs Bryan H Owsley.

He moved to the Huffinagle mansion in Bucks County, Pennsylvania in 1927 and was a member of several prestigious clubs including the Philadelphia Alliance, the Locust Club in Pennsylvania, the Washington Art Club, Salmagundi Club in New York, the American Federation of Art and the Charcoal Club in Baltimore. He was awarded a bronze medal at the St. Louis Exposition in 1904 and a bronze medal at the Panama-Pacific Exposition in San Francisco in 1915. He exhibited at American institutions such as M Knoedler and Co in New York and also in 1917 at Le Salon des Artistes Indépendants in Paris.

Examples of Rosenthal's are held in seventeen US institutions including the National Portrait Gallery in Washington, the New York Historical Society, Brooklyn Museum of Art, Butler Institute of American Art, the State Museum of Pennsylvania, Kansas City Art Institute, Los Angeles County Museum of Art and the St Louis Museum. The research that he undertook to make his etched portraits was a significant academic and historical accomplishment and he made copious notes on American art and artists as well as entering into correspondence with artists and art historians. He donated his collection of American drawings to the Free Library of Philadelphia in 1927 and his notes and correspondence are now held in the Archives of American Art at the Smithsonian.

In the final paragraph of his book he writes: "My activities simply represent the historical bent which was imposed on me…doing the best I know how, with feeling, however, that every now and then a plate was made, or a portrait painted, worthy perhaps, to survive for its technical and artistic excellence, aside from the historical interest of the subject."