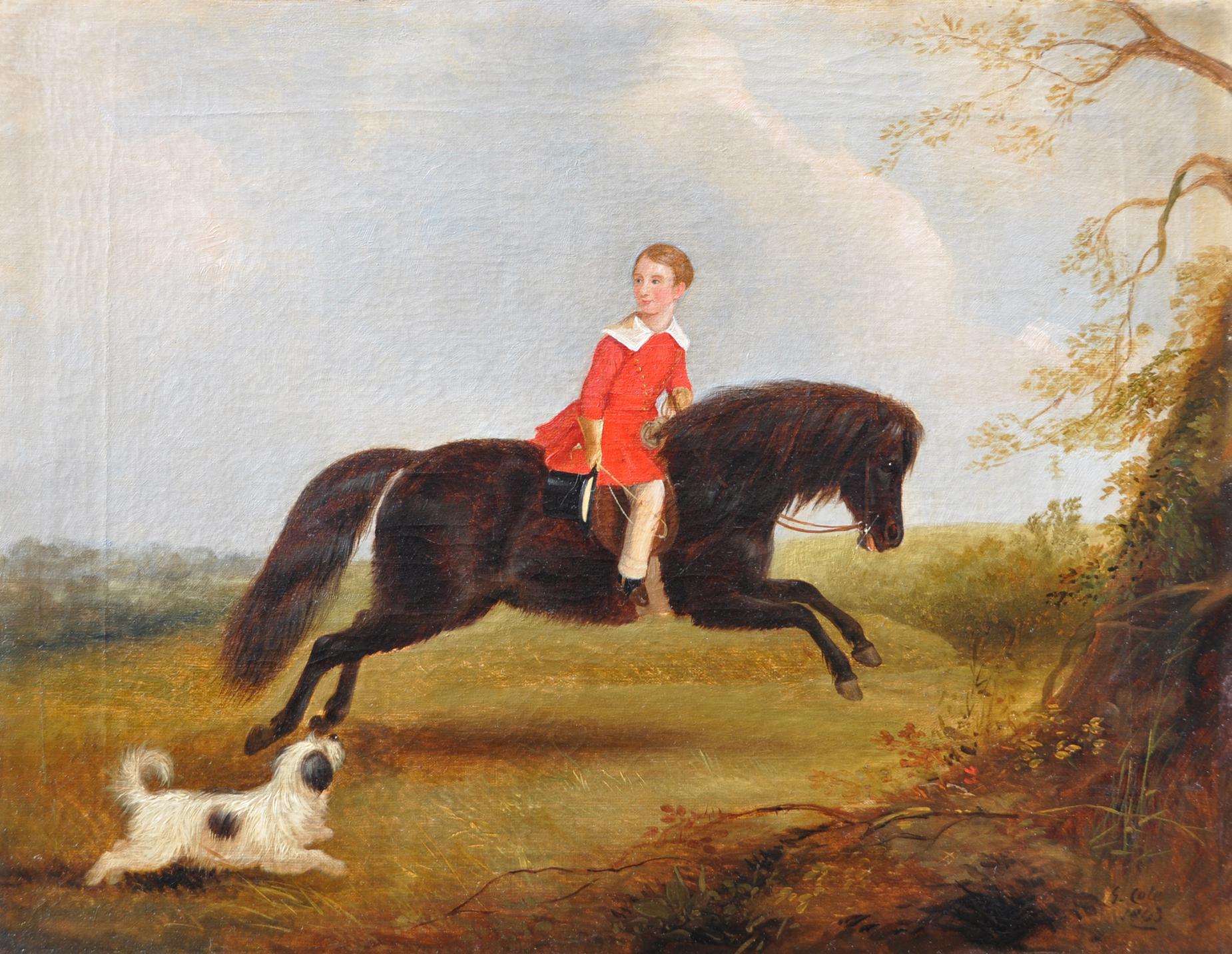 George Cole was a portrait, landscape, animal and occasional still-life painter who was the first of three generations of artists, firstly with his sons George Vicat Cole R.A. (1833-93) and Alfred Benjamin (exhib.1867-83) succeeding him in landscape painting and then his grandson Reginald Rex Vicat Cole R.O.I. (1870-1940) continuing the family tradition.

He was born in Portsmouth on 15th January 1810 and he was self-taught as an artist and obtained an apprenticeship as a ship's painter at the Royal Naval Dockyards in Portsmouth. His first works as an artist were portraits but the proprietor of Wombwell's Menagerie allowed him to make animal studies from life which so impressed the owner that the young Cole obtained a commission to paint advertisements for the business. One of these was a large canvas which depicted a tiger hunt with elephants in a jungle setting and measured twenty feet square. It suffered significant damage in a storm soon after it was erected at the Weyhill Fair in Hampshire but was reassembled and taken to the Great Barthelmy Fair in London to promote the menagerie's involvement there.

The plaudits that the young aspirant artist won for this commission encouraged him to pursue the depiction of animals more seriously and naturalistically and to this end he travelled to Holland to study the work of the Dutch Masters and upon his return to Portsmouth he devoted himself for several years to animal painting. There is an anecdote of this time in Portsmouth that he was commissioned to paint the portrait of a Dutch merchant, who, upon seeing the completed work, complained that as it was not representative of him so he would not pay for the work. Cole was undeterred however and added wings to the man's figure and placed it in a shop window with a label bearing the title The Flying Dutchman. The merchant's friends saw the painting and reported the joke to him and the debt was promptly settled.

George Cole exhibited his first painting A farm yard at the Royal Society of British Artists in 1838 when he was living at Green Row in Portsmouth and in 1839 sent his first work to be shown at the British Institution. It was the start of a long association with the London exhibition venues which endured until 1883 and included thirty-five at the British Institution, sixteen at the Royal Academy and two hundred and nine at the RBA.

He had married Eliza Vicat in 1831 and they had their first child, George Vicat, in 1833 and had five children in all. Cole had numerous commissions from influential figures such as Admiral Codrington, General Yates and Sir Robert Peel - for whom he painted his dog Cato - and horse and hunting pictures and racing portraits such as Mr Sadler's 'Decisive' held by his trainer with John Day on his back at Stockbridge; Orlando, a bay racehorse, held by a trainer, in a stable, Meet of the Calpe Hunt in the Cork Woods and John Peale on his favourite hunter. Around 1850, Cole resolved to concentrate more on landscape painting although animals did continue to feature extensively in his work. Sally Mitchell writes that "…it is regrettable that Cole did not paint more horses." He took instruction from the marine and landscape painter John H "Jock" Wilson (1774-1855) and he journeyed widely around the United Kingdom painting many scenes in Hampshire, Sussex, Surrey, Berkshire and Kent but also in Wiltshire, London, Oxfordshire, Cornwall, Devon, Yorkshire, Cumberland, Perthshire, the Trossachs, the Wye valley, Snowdonia, Caernarfonshire and Germany. He was instructing his son George in painting and took him with him on these painting expeditions in the early 1850s but in 1855 there was a serious disagreement between the two and although they were later reconciled, they never worked together again.

George Cole's landscapes in the late 1850s were evolving as his ambition developed and his rustic genre sit well in the carefully considered landscape settings. In the 1860s, he began to work on larger canvases and agricultural crafts and labourers involved in haymaking and harvesting, lime kiln workers or fern gatherers are given almost a heroic and idealised character. The colours and hues in the landscapes are detailed and rich and there was an eager Victorian public for this bucolic depiction of Albion.

The Coles lived in Portsmouth until 1852 then moved to London, first in a house in Fulham until 1854 then moving to The Crescent in Kensington. He was elected a member of the R.B.A. in 1850 and became an auditor of that body in 1856 and then vice-president in 1867. The Society for the Encouragement of the Fine Arts awarded him a medal in 1864 for a harvesting scene and he worked very hard at producing paintings to satisfy collectors, often selling directly to dealers such as Arthur Tooth who had eager clients. The financial rewards were impressive which enabled him to purchase Coombe Lodge, a small estate in Hampshire in the mid-1860s while still maintaining his Kensington home and he was earning over £2,500 a year in 1873, a significant amount at the time. He was fascinated by travel and collected topographical literature and was apparently devoted to the works of Shakespeare.

Some titles of his exhibited work include: Fittleworth Old Mill, River Rother, Sussex; The Weald of Sussex, Chanctonbury Downs in the distance; On the Thames near Greenwich; Rick making: Luncheon time; Fern carting, mist clearing off; Entrance to Portsmouth Harbour with British Man of War; View of Salisbury from Harnham Hill, Wiltshire with harvesters in the foreground; A farrier's forge Cochem, on the Moselle; Don Quixote and Sancho Panza in Pedro's hut and Fruit.