Still life of flowers in an urn with a parrot, melon, pomegranates and figs at its base, a view to an ornamental garden beyond; and companion painting, a pair 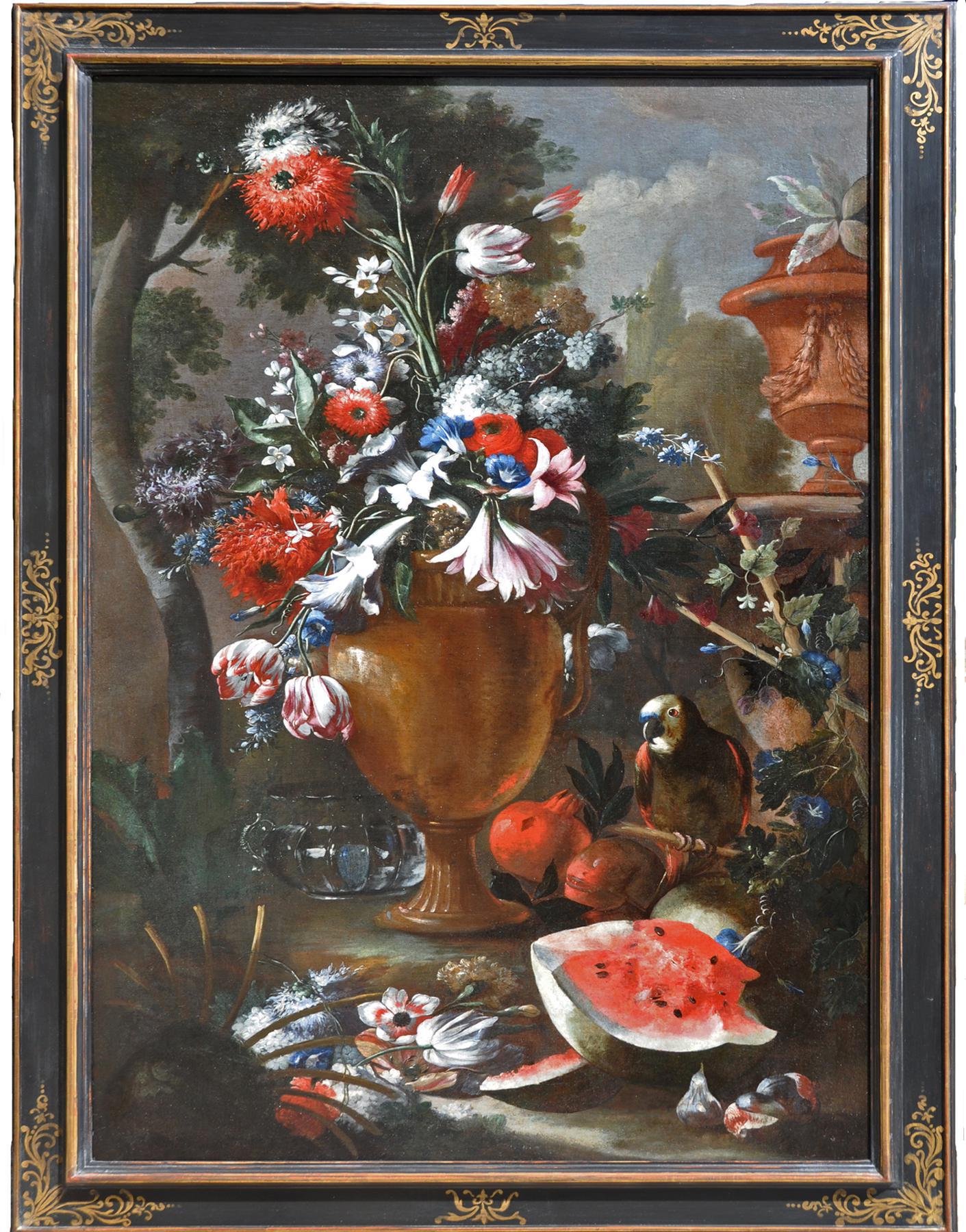 Still life of flowers in an urn with a parrot, melon, pomegranates and figs at its base, a view to an ornamental garden beyond; and companion painting, a pair

Oil on canvas, a pair

The latter half of the 17th century and earlier 18th century marked the golden age of Neapolitan still-life painting and Aniello Ascione was one of its most highly regarded exponents. His sumptuous paintings, brimming with fecund produce of the Mediterranean and painted in rich colours, were eagerly sought after by those who wished to decorate their palaces in that city.

Naples in the seventeenth century had established a significant reputation and artistic tradition of producing flamboyant and technically excellent still-lifes which had largely been initiated by Caravaggio who, having stated that it required as much effort to paint a good flower piece as a figure subject, helped to revolutionise and eventually abolish the closed attitude to genres of painting. Caravaggio maintained that art was the mirror of nature and his superb Basket of Fruit, now in the Ambrosiana in Milan and painted in 1597, marked the birth of European still-life painting. Throughout the 17th century, Neapolitan still-life painting was founded on the principles demonstrated by Caravaggio and these artists seem to have been the only ones to correctly understand and utilise his ideas. These paintings were noted for their vibrant portrayals of flowers, often in great abundance, fruit and birds done in an elegant and decorative manner.

Luca Forte (c.1615- c.1670) was one of the first Neapolitan artists to adopt the Caravaggesque naturalism in this genre of painting and with exceptional creativity sweeping through the city in the 1630s, he was soon followed by Paolo Porpora and Guiseppe and Giovanni Battista Recco and the Ruoppolo family. When Abraham Brueghel arrived in Naples in about 1670, his influence accelerated the transition of the portrayal of still-life to a more baroque style often epitomised by a mass of flowers, cascading over classical objects like water.

This more baroque style was taken up by a new generation of painters and one of the first and most prominent of these was Andrea Belvedere (1652-c.1732). He taught Nicola Casissa and other artists working in a similar vein included Gasparo Lopez (called Gasparo di Fiori) d. circa 1732, Paolo Porpora (1617-1663) and Nicola Malinconico (1663-1721). The aforementioned Ruoppolo family were also eminent and Giovan Battista Ruoppolo (1619-1693) instructed the young Aniello Ascione. His pupil became one of the most celebrated representatives of Neapolitan Baroque which combined the traditional naturalism favoured by the city with the new 18th century decorative style. This style proved highly popular with the more secular Neapolitan middle classes as well as the aristocracy and royalty to furnish their grand homes. They loved the harmonious colouring and composition suffused with exuberance

Ascione became the most prominent still-life painter in Naples at the transition from the seventeenth and eighteenth centuries. His paintings, which are often of a significant size, utilise intense decorative colours with an abundance of flowers and piles of fruit such as pomegranates, grapes, peaches, pears, melons and plums. Sometimes these spill down stone steps or are draped or stacked with flowers among classical statuary and there is often a view to a landscape or ornamental garden beyond to give the composition depth. Accompanying the fruit and flowers, Ascione occasionally added parrots, dogs or rabbits and he often signed with a monogram comprised of interlocking As although there are some works signed in entirety. His smaller pieces tended to be more intimate in construction with one looking at just different fruits with some of its foliage so that the different hues and skin textures could interact and to some extent, these reflect the legacy of Abraham Brueghel. One very rare piece, now in the Castellino collection in Naples, is a kitchen interior with a skinned lamb which owes its influence to Guiseppe Recco.