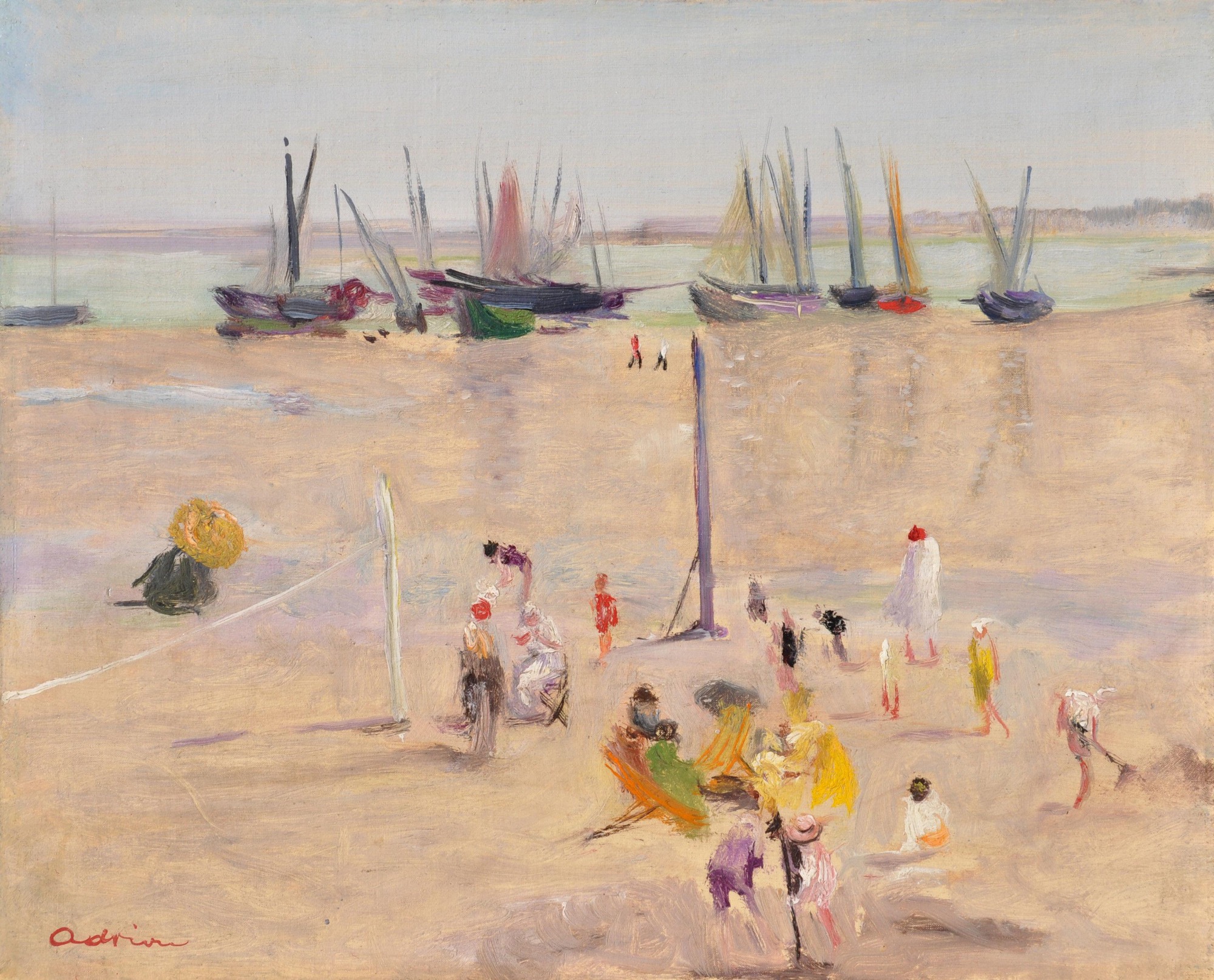 Lucien Adrion was a French painter of beach scenes and streets in Paris animated with figures and produced in a post- Impressionist style.

He was born in Strasbourg in 1889 and his first employment was in that city where he worked as a technical draughtsman. He left there in 1907, going to Paris and securing a job drawing fashion plates but remained only briefly in that position, having made the decision to concentrate on becoming a painter.

He took up an itinerant lifestyle, travelling from place to place and producing drawings, studies and sketches of the places that he stayed. London and the south of England, Frankfurt and Munich were all visited but he was caught up in the latter by the outbreak of the Great War and had to leave Germany. When the war was over, he returned to Berlin to study engraving under Chagall's former teacher, Hermann Struck.

In 1919, he went back to Strasbourg, remaining there briefly to work on a series of small lithographs, the sale of which enabled him to raise sufficient funds go to Paris where he staged his first one-man show of oil paintings at La Galérie Chéron in 1921. He had found a studio in Montparnasse and became part of a circle of young Eastern European artists which included Pinchus Krémegne, Chaim Soutine and Michel Kikoine who were part of the non-French section of l'École de Paris. This artistic group comprised artists from France and elsewhere which defined Paris as the centre of progressive art in the early 20th century to the outbreak of the Second World War. Members had included Mondrian, Chagall, Modigliani, Matisse and Bonnard and incorporated styles in Post-Impressionism, Cubism and Fauvism.

Initially, Adrion's subject matter in oils was the streets of Paris and he garnered recognition for his ability to portray the vitality of the crowds as well as their shifting movement. However his restless spirit came to the fore again and he sought fresh inspiration which he found in the coast and beaches of Normandy. He broke his contract with Chéron which meant that he had to find other ways to show his new work to prospective buyers. He exhibited at Le Salon des Indépendants for the first time in 1926 and his beach scenes proved highly popular. He continued to show there over the following years and also exhibited at Le Salon d'Automne and Le Salon des Tuileries.

Lucien Adrion died in Paris in 1953 and a major retrospective exhibition of his work was held in Cologne in 1973.