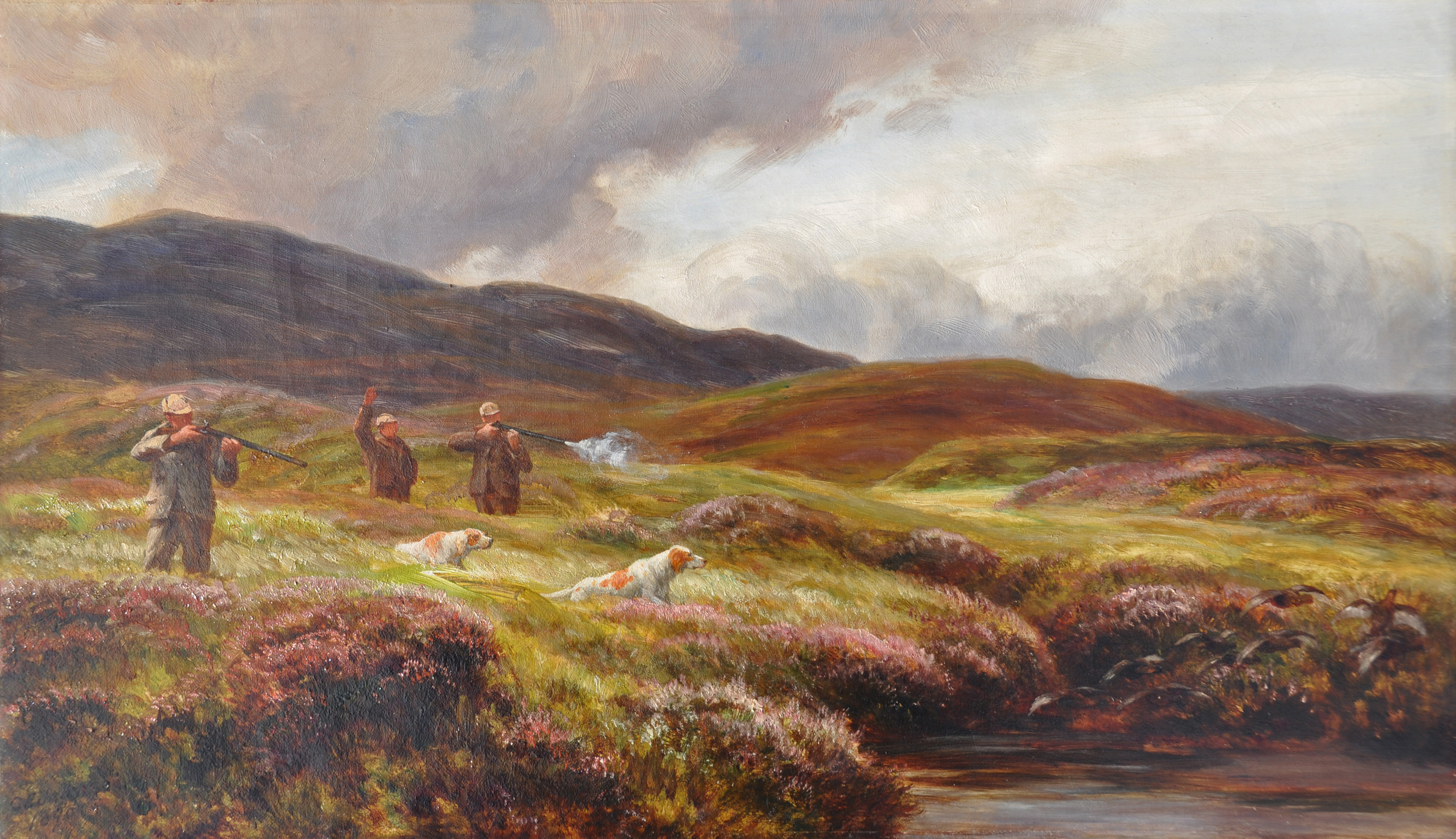 C E Johnson was primarily a landscape painter in oils and watercolours, particularly of Scotland and the Welsh borders, but he was also a skillful animal painter, including them in his rural scenes and he also depicted sporting subjects as well as being an occasional etcher.

He was born in Stockport on 9th March 1832 and attended Stockport Grammar School before undertaking his artistic training at the Royal Academy school in London. He was still living there in 1855 but by 1858 he was in Edinburgh where he started his career. However, his stay in Scotland was comparatively brief for he returned to London in 1864 where he continued to reside until 1897.

Landscapes and rural life comprised a large part of these works with titles such as Glencoe, Ben Nevis in winter; The Wye and the Severn; Harvest time; The horse Dealer; Sheep dipping; On the Thames near Oxford and A peaceful river which was painted in 1895 and is now in the Victoria and Albert Museum collection.  However, these are interspersed with a few marines such as The American Brig Atalante in coastal waters; A Hastings trawler going out and The last of the Spanish Armada, a scene on the west coast of Scotland in 1587.

Most of the sporting scenes depicted by Johnson were set in Scotland with The grouse shoot; Bringing home the stags; Deer stalking and The home of the red deer being some typical titles. The quality of his exhibits earned him election as a member of the Royal Institute of Painters in Watercolours in 1882 and of the Royal Institute of Oil Painters in 1883. He also won a Bronze Medal in Paris in 1899.

Tate Britain has in its collection The Swineherd; Gurth, son of Beowulph, painted in 1879, which had originally been purchased by the Chantrey Bequest. Other museums and institutions which hold paintings by him in their collections include: Wolverhampton Art Gallery; Sheffield Museum; Perth Art Gallery, Stirling Smith Art Gallery and Museum;    Stockport Heritage Services; Derby Museum and Art Gallery; The Touchstone in Rochdale and Williamson Art Gallery and Museum. The British Museum has a watercolour by Frank Holl (1845-1888) called The sketch club, painted in 1883, which have the portraits of Philip Morris (Associate RA) and the artists John Burr, John MacWhirter, James Clarke Hook, John Pettie, Robert Walker Macbeth, Charles Edward Johnson, Colin Hunter, and Peter Graham set in a room, with the nine figures sitting at a table.

Some of his landscapes were engraved and made into prints such as The cliffs of Balmacara and Fingal’s Cave by Alfred Louis Brunet-Debalnes in 1883.

In 1897, Johnson moved to Richmond in Surrey where he ran a school for landscape painting, remaining there until his death on 11th February 1913.